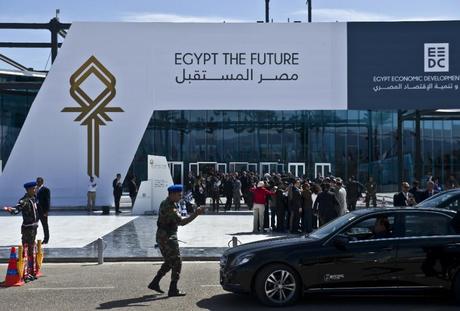 Egypt plans to build a new administrative and business capital east of Cairo that will house five million people and feature a theme park "four times bigger than Disneyland", a minister announced at a global investor conference.

Housing Minister Mustafa Kamel Madbuli said the new city would relieve pressure on overcrowded Cairo, with its population of 18 million expected to double in coming decades.

"The idea to build the new city originated from our awareness that Cairo's current population will double in the next 40 years," Madbuli said Friday in a presentation showcasing the details.

Madbuli said the new city would have large green spaces and provide a better standard of living.

It will also have "an international airport, a theme park four times bigger than Disneyland in California, 90 square kilometres of solar farms, and an electric train" to link with Cairo, he added.

Parliament, presidential palaces, government ministries and foreign embassies would move to the new metropolis, the minister said, adding these projects would be executed over the next five to seven years at a cost of $45 billion (42.9 billion euros).

The overall cost of the new city was not revealed, nor were details on how it would be funded.

Sisi, who has positioned himself as a bulwark against jihadists, said investing in the Arab world's most populous country would help stabilise the entire region.

Egypt's stability "is a cornerstone in regional stability," he told the conference in the Red Sea resort of Sharm el-Sheikh.

Arab states pledged $12 billion in investment aid but the United States came empty handed, with Secretary of State John Kerry only affirming that Washington stood beside Egypt as it seeks to recover from years of turmoil.

A visibly irritated Kerry, who was slotted as the 15th speaker at the opening session, promised Washington's "full commitment" for the security and prosperity of Egyptians, which he said they "desire and deserve."

Kuwait, the United Arab Emirates and Saudi Arabia pledged $4 billion each. Most of the funds will be invested in projects while $3 billion will be deposited in Egypt's Central Bank.

Kerry, who earlier met Sisi and the leaders of Jordan and the Palestinian Authority, told businessmen that Washington was "eager and ready and willing" to help Egypt's economic development.

But a US diplomat travelling with him said there had been "no decision" on freeing up $650 million in military aid frozen during the height of a crackdown on Sisi's Islamist opponents that left hundreds dead.

Washington had released some of the aid, including the delivery of Apache helicopters Egypt says are important for its fight against Islamist insurgents in the Sinai Peninsula.

Sisi, who won elections after toppling Islamist president Mohamed Morsi in 2013, has been criticised for unleashing a crackdown on Morsi's supporters.

The former army chief has portrayed his Islamist opposition as no different from radical militants such as the Islamic State group, which has affiliates in Sinai and Egypt's neighbour Libya.

"A country that rejects violence and terrorism and extremism, a country that strengthens regional stability and peace."

Restoring the economy and attracting foreign investment have been key tenets of Sisi's presidency.

In one of the biggest deals expected at the conference, British Petroleum is to sign a $12 billion agreement -- shared with its Russian partner DEA -- to develop Egyptian gas fields.

Conference consultant Richard Attias told Agence France Presse that "more than 30 projects will be unveiled, which can attract billions of dollars of investment."

GE unveiled plans to set up a $200 million training and manufacturing facility in the canal city of Suez.

"For Egypt this is not an economic event, but rather a political one," a Western diplomat told AFP.

Representatives from about 100 countries and international organisations are attending the event, giving the conference a firm diplomatic push in a bid to strengthen Sisi's international status.

"The aim is to put Egypt back on the map of international investment, and send a message to the world that the country is safe and attractive," International Cooperation Minister Naglaa al-Ahwani said.

"They particularly want to return Egypt to the headlines in a positive way," said Aaron Reese, a researcher at the Washington-based Institute For The Study of War.

Sisi amended the law Thursday to make it more attractive for foreign investment, which has plummeted since the 2011 uprising that ousted longtime president Hosni Mubarak.

Egypt aims for 4.3 percent growth in 2015-2016, compared with two percent annually since the anti-Mubarak uprising, while also reducing the budget deficit and easing unemployment.