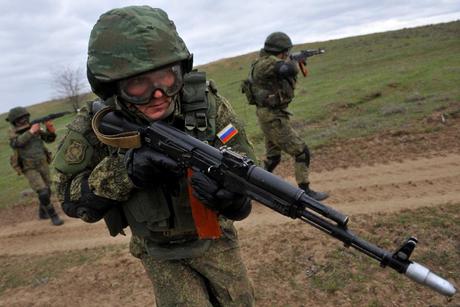 Russia said it was ending military drills Saturday that saw over 80,000 troops mobilised from the Pacific to the Black Sea in a show of force amid tensions with the West.

A senior military official said that the nationwide exercises -- that included sending nuclear bombers to Crimea and ballistic missiles to Kaliningrad in the heart of Europe -- would end on Saturday afternoon.

President Vladimir Putin gave the order for them to start on Monday.

"Troops have been given the order to return to their permanent bases," Lieutenant general Andrei Kartapolov was quoted as saying by the Interfax news agency.

The massive military exercises -- some of the biggest by Russia since the collapse of the Soviet Union -- have givem leaders across Eastern Europe the jitters.

Moscow and the West are locked in a bitter showdown over the crisis in Ukraine that has pushed relations to their lowest point since the end of the Cold War.

Kiev and its allies accuse the Kremlin of pouring arms and troops across its border to spearhead a bloody pro-Russian rebellion, allegations that Moscow denies.

NATO members including the United States and Germany have beefed up exercises with the alliance's eastern nations, such as Poland and Lithuania, in a bid to reassure allies anxious over a bullish Russia.