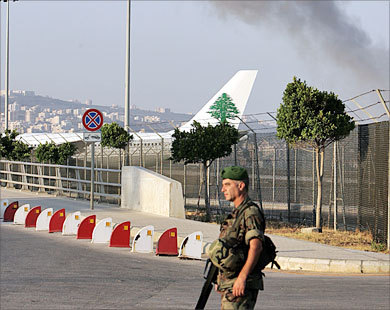 Several embassies have tightened travel warnings for Lebanon, advising their nationals to avoid parts of the country due to unrest in neighboring Syria and the kidnapping of a group of Estonians.

The British embassy now advises its nationals to avoid travel to Lebanon's eastern and southern borders with Syria following incursions by Syrian troops into the country.

"We advise against all but essential travel to anywhere within five kilometers (three miles) of the border with Syria," reads the travel warning updated on Wednesday.

"There have been a number of incidents where Syrian troops have crossed into Lebanon at various points on the border," it adds. "These incursions have been unpredictable and violent."

Embassies including those of the United States, Australia, Britain, Canada and France have also warned of the risk of abduction in Lebanon after seven Estonian nationals were kidnapped at gunpoint in the Bekaa Valley in March.

The Estonians were released unharmed in July and some of their abductors were killed in a police raid last month.

The U.S., Canadian and Australian embassies also cite in their warnings the Special Tribunal for Lebanon, a U.N.-backed court which has charged four Hizbullah operatives with the 2005 assassination of ex-premier Rafik Hariri.

"U.S. citizens in Lebanon should monitor ongoing political developments, particularly in relation to the Special Tribunal for Lebanon, as Lebanese political leaders have warned publicly that the tribunal's findings could spark civil unrest," reads a travel advisory issued by the U.S. embassy on Thursday.

France now also includes in its list of areas to avoid the popular city of Sidon in the south after U.N. peacekeeping troops were the target of a roadside bomb there in July as well as the northern port city of Tripoli.

I wonder which embassies will the filthy Zionist infested Iranian terrorist so called Islamic resistance in Lebanon target this time after Iraqi, French and US embassies.

Estonians: We Love Lebanon ))) and Allways will be )))