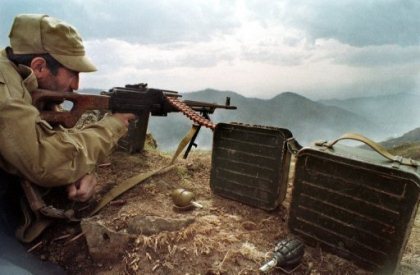 Armenian forces on Thursday killed an Azerbaijani soldier in the latest breach of a ceasefire between the arch-foes locked in a simmering conflict over the disputed Nagorny Karabakh region, officials in Baku said.

"Armenian forces have yet again violated the ceasefire and killed an Azerbaijan army warrant officer," Azerbaijan's defence ministry said in a statement without giving further details.

His death takes to at least 26 the number of people reported killed this year on both sides.

Armenia and Azerbaijan have been locked in a dispute over the Nagorny Karabakh region since a bloody war in the early 1990s following the breakup of the Soviet Union.

Yerevan-backed ethnic Armenian separatists seized control of Karabakh and several other regions of Azerbaijan during the conflict that left some 30,000 dead.

Despite years of negotiations, the two countries have not signed a final peace deal following a shaky 1994 truce.

The predominantly Armenian-populated region is internationally recognised as part of Azerbaijan.

Karabakh's ethnic-Azeri community -- around a quarter of the population before the war -- was driven out.

Threatening a shaky 1994 truce, clashes between Azerbaijani and Armenian forces across their shared border and along the Karabakh frontline intensified last year.