Presidential Elections Postponed to May 13 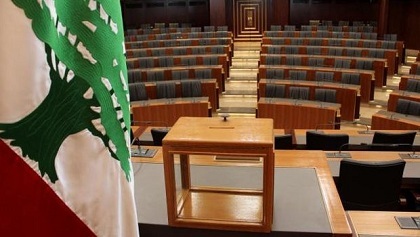 The presidential elections were postponed once again after parliament failed for the 22nd time to meet the required quorum to hold the polls.

Speaker Nabih Berri postponed the elections to May 13.

MTV reported that 44 lawmakers were present at the session.

The constitution should eventually be changed to force people to come vote. Either quorum with whoever is there, whether 10 or 100 deputies. Or, strip a deputy of his credentials if he doesn't show up to elect a president.

That way, you get a president elected every time, and whoever wins, wins.

I have always said that I am in envy of countries like Belgium and Australia where voting is compulsory.

If the Change and Deform Bloc plus Loyalty to Iran want Michel Aoun, then their wait will be forever. Even though the country now more than ever desperately needs a new president, but so long as M8 wants to impose a charlatan like Aoun the traitor, then it is best to block his very candidature. The M14 side has repeatedly agreed on a compromise candidate just to get the country out of this stranglehold of an impasse but M8 has consistently abused of this move. The truth is, there will be NO Michel Aoun and by default NO traitor, no rubber-stamper, no Clown, no Speedy Gonzales to take that seat. Either its a real human being or nothing.

The picture of the empty chamber is appropriate. Its not much different when the suits are in the chairs. Result is the same. Silence, no action. and besides, the Chamber no longer exists its mandate having expired in November 2014 and June 2013 before that. Government in Lebanon is on a prolonged, self imposed hiatus pending orders from the political class' constituents in Iran, Saudi Arabia, Kuwait, France, the US . . . Poor the Lebanese people. But then, they don't care about the government anyway.