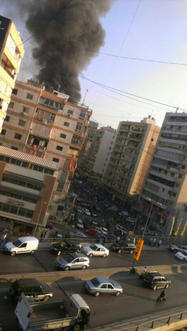 A member of the Popular Front for the Liberation of Palestine-General Command (PFLP-GC) was reportedly detained by the organization for seeking to carry out security attacks in Beirut's Southern Suburbs – Dahiyeh and the coastal town of Naameh, around 20 kilometers south of Beirut.

According to al-Joumhouria newspaper published on Tuesday, Mohammed Mohammed, previously served at the organization's base in Naameh, its most prominent military position in Lebanon, which also contains a quantity of missiles.

The PFLP-GC had expressed willingness to hand over Mohammed to the Lebanese Army Intelligence but is awaiting for a decision by the group's secretary-general Ahmed Jibril.

Mohammed, who hails from the southern Palestinian refugee camp of Ain el-Hilweh, was working within a group led by Bilal Bader, a former leader of the militant groups Jund al-Sham and Fatah al-Islam, to carry out a series of security breaches in PFLP-GC general command center in Dahiyeh's Palestinian Burj al-Barajneh refugee camp, Naameh tunnel and Beirut's southern suburbs.

The suspect allegedly confessed to being tasked with collecting information to aid Bader and his militant group.

The group was seeking to assassinate PFLP-GC member Bater Rateb al-Nemr, who goes by the nom de guerre of Abou Nemr, and military commander Abou Ali Qassem at Burj al-Barajneh simultaneously to cause chaos at the camp and allow the militant group's members to sneak into the PFLP-GC base.

The operation reportedly seeks to create a Shiite-Palestinian strife.

At the same time, the militant group would also steal Grad rockets from the PFLP-GC base in Naameh for the purpose of firing them at Lebanese army checkpoints in Dahiyeh.

According to al-Joumhouria newspaper, Lebanese security agencies are contacting PFLP-GC to follow up the case.

The daily said that Lebanese security agencies received during the past two years information that indicates a rift would occur between PFLP-GC members.

This is a scandal that this orI assad palestinian militias that was responsible of massacres against the Christians in the first years of the civil war (damour, burn el brajneh) is not disarmed and kicked outside lebanon. However this is jot possible thanks to the backing of khizbollah and general cloun.

As long as the LAF and ISF need permission from any organization (PFLP, HA, you name it), Lebanon will be a failing State.

Mystic I hope you dennounce the fact that the fplp-gc has two bases in lebanon and armed.

Why should I? Pflp are one of the last honorable palestinian resistance groups left.

Mystic, because we need to have a country free of militias and where only the army and the police can have arms

mowaten you are not Lebanese. Everybody here knows you are an iranian shia so cut the BS.

no eagleyawn, what everybody knows is that you're an israeli hasbara shill who is paid to steal and paste comments here all day.

the troll brigade is on duty i see.

Eagle: thanks for tellng the truth.

i hate takfiris and israelis, if you feel concerned by my hatred it means you fall in one of these categories.

He is in the zionist category.

no wonder there is not a single palestinian refugee camps in all the gulf countries !!!!