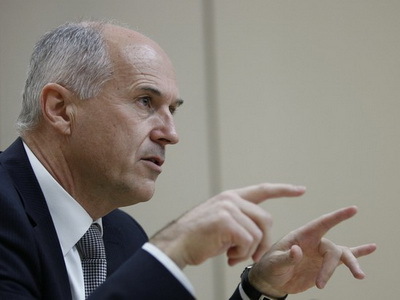 The international envoy for Bosnia told the U.N. Security Council on Tuesday that any attempt by Bosnian Serbs to revive their separatist ambitions must be firmly rebuffed.

High Representative Valentin Inzko said he was concerned by the Bosnian Serb ruling party's threat to hold an independence referendum in 2018.

Russia in turn accused the envoy of "looking for people to blame" and defended Bosnian Serb complaints that too much authority was being exercised by the central authorities.

Under a peace deal that ended Bosnia's bloody five-year war in 1995, the country was divided into two entities -- the Bosnian Serb republic and the Muslim-Croat federation -- which are held together by a weak central government.

Inzko told the 15-member council that secession and division have "their place in the history books."

"God forbid that anyone should seek to reactivate these dangerous strategies."

"If they do, they will need to be dealt with firmly and decisively," he said.

France and Britain recalled that under the 1995 Dayton peace deal, Bosnians, Croats and Serbs agreed to bury their separatist agendas and work to build a united country.

"Republika Sprska does not have the right to secede," said British Ambassador Matthew Rycroft, using the formal name for the Bosnian Serb Republic.

Russian Ambassador Vitaly Churkin accused the envoy of "distorting the situation" and ignoring calls from Bosnians for greater central authority and from Bosnian Croats to create a separate entity.

Churkin said it was time to wind down the office of the high representative, who is tasked with implementing the Dayton accord, and allow the three parties to resolve differences themselves.

"There must be practical steps to wind down this foreign protectorate which is insulting to the sovereignty of the country," said Churkin.

The Security Council was holding its biannual debate on Bosnia, which remains deeply divided along ethnic lines 20 years after the end of the war.