Murder at Mullaghmore: The Day the IRA Killed Mountbatten 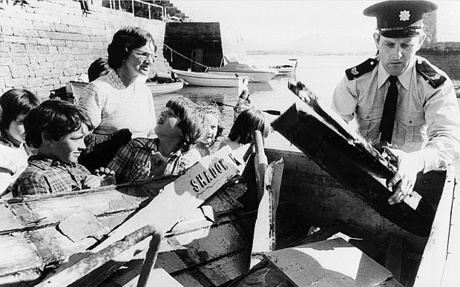 It was a beautiful morning when Lord Mountbatten took his family out on the water off western Ireland, the last trip of the summer that ended in bloodshed when their boat was blown up by the IRA.

Louis Mountbatten, a cousin to Queen Elizabeth II, uncle to her husband Prince Philip and godfather to her son Prince Charles, died along with his teenage grandson and two others in an assassination that shocked the world.

The attack on Irish soil was one of the most high-profile incidents in the three decades of sectarian unrest over British-ruled Northern Ireland, in which 3,500 people died.

On the same day, 18 British soldiers were killed in IRA bombings across the border, near Warrenpoint in Northern Ireland.

On Wednesday, Charles will become the first member of the royal family to visit the site where his beloved mentor died in the quiet coastal village of Mullaghmore in County Sligo.

Mountbatten, the last viceroy of British-controlled India and a decorated naval officer, regularly spent summer holidays with his wife and children at Classiebawn castle at Mullaghmore.

He enjoyed going out to sea in his fishing boat, Shadow V, and was on one such trip when tragedy struck on August 27, 1979.

By now a 79-year-old widower, Mountbatten was joined by his daughter Patricia and her husband John, their 14-year-old twin boys Timothy and Nicholas, John's elderly mother Lady Doreen Brabourne and a 15-year-old local boy helping out on the boat, Paul Maxwell.

The sea was calm and the sun was out, but at around 11:30am, the peace was shattered by a huge explosion that destroyed the vessel and sent its passengers flying.

Witnesses described seeing flames, bits of debris flying all around and a huge cloud of smoke rising up from the water.

Local fishermen rushed to the rescue but Mountbatten's legs had been all but blown off and he died shortly afterwards.

Mountbatten's grandson Nicholas Knatchbull and Paul Maxwell were both killed, while Brabourne, 82, died the next day.

Although Mullaghmore is just miles (kilometres) from the border with Northern Ireland, the attack was unexpected. Mountbatten had no bodyguard and local police kept an eye on the castle while he was there.

Britain was profoundly shocked by the incident, which was claimed by the Irish Republican Army (IRA), the paramilitary group that waged a bloody war for an end to British control of Northern Ireland.

Thomas McMahon, a 31-year-old IRA bomb-maker arrested during a routine traffic stop just hours before the attack and in custody when it happened, was later found guilty of the murders.

But those responsible for setting off the bomb were never found, and the police investigation remains open.

McMahon was released under the terms of the 1998 Good Friday peace accords, which largely brought an end to the unrest.