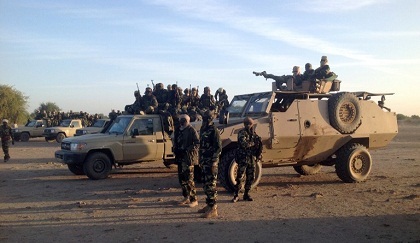 A clash between Chad's army and Boko Haram on a Lake Chad island has killed four soldiers and 33 Islamists, a military spokesman said Friday.

He added that Chadian military planes had been targeting Boko Haram positions on the lake since Thursday and had destroyed food, fuel and munitions belonging to the insurgents.

Since January, Chad has been part of a regional military operation aiming to oust the Islamist group from swathes of territory which it had seized in northeast Nigeria.

Heavy clashes have taken place in recent months on and around Lake Chad, which is the meeting point for the borders of Nigeria, Chad, Cameroon and Niger.

In addition to the fighting in Nigeria, Boko Haram has launched repeated attacks in Niger and Chad.

Chadian soldiers have also fought the militants in Cameroon's northern reaches, which has suffered from ongoing Boko Haram attacks in the last two years.

Sources in Chad's military say about 5,000 of its soldiers are taking part in the fight against Boko Haram. In April Chad announced that 71 of its troops had been killed in operations against the Islamists.