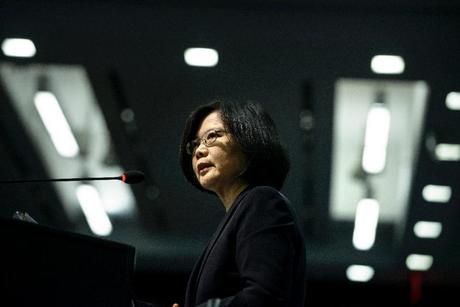 Taiwan's main opposition leader sought to assure Washington on Wednesday that if she wins next year's presidential elections she would work to maintain stability with China amid regional volatility.

But Tsai Ing-wen, chairwoman of the Democratic Progressive Party (DPP), also called for stepped up military ties with the United States and for Taiwan to be included in a vast emerging Pacific trade pact.

On a 12-day visit to the United States, Tsai is seeking to improve relations between her party and the island's leading ally ahead of the 2016 elections in which she is seen taking a strong lead over the embattled Kuomintang ruling party.

She met Tuesday with officials at the State Department to discuss "a wide range of issues," senior U.S. spokeswoman Marie Harf said, while refusing to reveal exactly who Tsai held talks with in a sign of how sensitive the issue of Taiwan is.

The U.S. has "an abiding interest in peace and stability in the Taiwan Strait," Harf added.

"Taiwan is and will continue to be a reliable partner of the U.S., ensuring peace and stability," Tsai told a Washington-based think-tank.

"We have a responsibility to contribute to the peaceful relationship across the Taiwan Strait."

And she insisted at the Center for International and Strategic Studies: "As Asia faces rising nationalism... and threats of military conflict we intend to engage in proactive peace diplomacy, that fosters peace and stability."

Tsai's DPP irked Washington when it was last in power, when then president Chen Shui-bian decided to hold a referendum in 2008 on whether the island should apply for UN membership under the name of Taiwan.

China still regards Taiwan as part of its territory waiting to be reunified by force if necessary since their split in 1949 at the end of a civil war. And Beijing opposes any visits abroad by Taiwan officials.

Despite their lack of official diplomatic ties, the United States has been the leading arms supplier to Taipei.

It sent a battle carrier group to waters near the island during the 1996-97 missile crisis in the Taiwan Strait, a clear warning to Beijing not to invade.

Tsai openly suggested she would seek deeper military ties with the U.S. if elected, and pledged to set up a task force to ensure Taiwan was ready to join the Trans Pacific Partnership -- a vast trade pact under negotiation which would encompass 40 percent of the global economy.

"In light of the increasing military and security threat that Taiwan faces, developing symmetric capabilities that involve enhanced military relations with friendly forces and well-trained military personnel in a modern force structure .. are essential components of our deterrent," she told the CSIS.

To make Taiwan's economy more competitive and "our democracy stronger we need to build a military capable of safeguarding the country and maintaining peace."

"Proper investment in credible deterrents is the key," Tsai added.