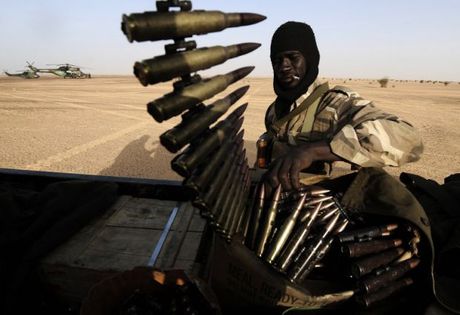 Malian soldiers killed three jihadis Wednesday during a search operation backed by Ivorian and United Nations troops at the site of an attack near its southern border, security sources said.

Public and police buildings were ransacked in the town of Fakola, 20 kilometers (12 miles) from Ivory Coast, on Sunday in an attack claimed by the Islamist militia Ansar Dine.

Security sources say the fighters retreated into the Sama forest, on the border, after the ambush.

"Our forces initiated search operations in a Malian forest where the terrorists were hiding on the border with Ivory Coast. Three terrorists were killed," a military official in Fakola told AFP.

The official added that "Ivorian comrades and U.N. peacekeepers in Ivory Coast also came in support" of the operation. The presence of Ivorian troops was confirmed by a councilor in Fakola.

The group has also claimed responsibility for an attack on a military camp near the Mauritanian border on Saturday during which three soldiers and nine militants were killed.

Ansar Dine told AFP on Tuesday it would "multiply the attacks in Ivory Coast, Mali and Mauritania", accusing all three countries of collaborating with "the enemies of Islam".

Jihadist attacks are normally confined to Mali's restive northern desert but areas bordering Mauritania have been targeted since the start of the year, and southern settlements more recently.

The arid north came under the control of Ansar Dine -- which is Arabic for Defenders of Faith -- and two other jihadist groups, Al-Qaida in the Islamic Maghreb and the Movement for Oneness and Jihad in West Africa, in April 2012.

A move south towards the capital by the extremists, who imposed a brutal version of sharia on inhabitants, prompted France to intervene in January 2013, pounding their positions in the north.

Their organizational structure smashed, small pockets of armed Islamists managed to remain active, and continue to carry out occasional deadly attacks in the desert.

Ivory Coast said on Monday it had sent "reinforcements" to the border, without specifying numbers or which branch of the security forces they were from.