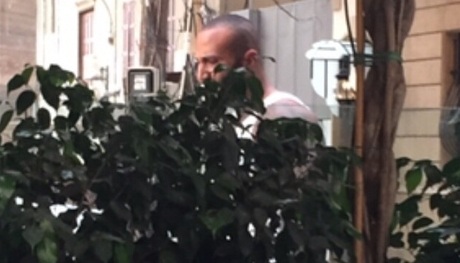 In 2012, Yatim was among those who opened fire at a motorcycle repair shop in Sidd al-Baouchrieh, killing Elie Numan and wounding two others, OTV said.

According to LBCI television, Wednesday's knife man and his group were also involved in a 2010 shooting at the Maison Blanche nightclub in Beirut. Mazen Zein and Sami al-Maamari were wounded in that incident.

Speaking to LBCI, Zein said Yatim was jailed for a period ranging from eight to ten months.

“He confessed to taking part in the crime … security forces did not allow me to face him after he was detained,” Zein said.

LBCI also reported that Yatim was involved in a 2012 incident at the Zahrat el-Ihsan School in Ashrafieh. It said the man and his associates beat up sports instructor Elie Farah and ripped off his ear after he did not allow a schoolgirl not donning sportswear from taking part in his class.

The TV network said the residents of the Ashrafieh neighborhood of Karm al-Zaytoun had been complaining of the “daily practices” of Yatim and his group.

In a phone interview with OTV, FPM chief MP Michel Aoun hoped the investigation will reveal all the circumstances of the crime.

“The criminal is known for his criminal record … The murderer's affiliation is also well-known and we hope the state will start deterring criminals,” Aoun added.

In response to a question, Aoun said “the killer was protected by certain security agencies.”

The FPM announced Friday that al-Rif was one of its activists. He was laid to rest Friday after a funeral at the Mar Mitr church in Ashrafieh.

Yatim was arrested Thursday by army intelligence agents in Ashrafieh. He had chased al-Rif all the way from the airport road to Ashrafieh to stab him with a knife on Wednesday after a dispute over traffic priority.

Some media reports said Yatim was under the influence of drugs when he was arrested.

What Aoun doeesn't recognize, is that his policy of backing a terrorist organisation, has created untouchables (Saints!) , and corrupted the whole system, by undermining the State, and the fear of the unescapable punishment.
When somewhere the system is corrupt, the whole system is, no parts are left sane !

Sorry but you have the story wrong. It was Al-Rif that was chasing Yatim for compensation on the damages inflicted on his car by Yatim. Yatim exploited this by leading Al-rif into a dead end. At which point the attack was initiated.

very sad story.. what a thug and a criminal.. protected by a criminal. I wish he gets what he deserves..

Next time you see a Kia Picanto, get as far away as possible!