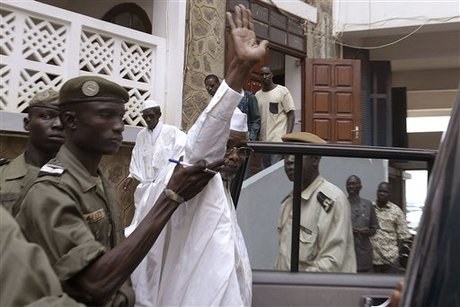 Chad's former dictator Hissene Habre will make history on Monday when he is tried in Senegal over his regime's brutality -- the first time a despot from one African country has been called to account by another.

Rights groups say 40,000 people were killed during his eight years in power under a regime marked by fierce repression of his opponents and the targeting of rival ethnic groups.

Habre, who held power between 1982 and 1990, is charged with crimes against humanity, war crimes and torture.

He will be tried by the Extraordinary African Chambers, a special court established by the African Union under an agreement with Senegal. The court is led by a judge from Burkina Faso.

They come at a time when relations between AU members and the International Criminal Court (ICC) are at an all-time low, a month after Sudan's Omar al-Bashir's escape from an international arrest warrant in South Africa.

The AU has accused the ICC of targeting only African leaders, highlighting that major powers such as Russia, China and the United States have refused to place themselves under The Hague-based court's jurisdiction.

"It's one thing for African presidents or African leaders to complain about abusive African leaders being sent to The Hague. It's another to show they can be tried in Africa," American lawyer Reed Brody, lead investigator for Human Rights Watch in the case, told AFP.

"This is a test case, in a way, for African justice."

Habre refuses to recognize the legitimacy of the court and has decided not to cooperate with the hearings, one of his lawyers, Ibrahima Diawara, told AFP on Thursday.

"Appearing in a trial is a right, not an obligation," Diawara said, adding that his client's health had been improving after a heart attack in June, but that he would not appear and had instructed his lawyers not to take part.

Chadian lawyer Jacqueline Moudeina told a news conference in Dakar in June the trial would be "a turning point for justice in Africa and will sound an alarm for all the dictators whose crimes will one day catch up with them".

Moudeina said the case for the prosecution -- particularly documents demonstrating a direct link between Habre the country's secret police, the Documentation and Security Directorate (DDS) -- was "solid".

To be in a position to try Habre, Senegal has had to amend its laws to adopt the concept of "universal jurisdiction", the basis in international law for one country to judge a foreigner for offenses allegedly committed in another.

Chief prosecutor Mbacke Fall says his team have heard from almost 2,500 victims and 60 witnesses since the opening of the investigation against Habre in July 2013.

More than 4,000 "direct or indirect" victims have been registered as civil parties to the case and the court is scheduled to hear from 100 witnesses over three months.

The nine million euro ($10 million) trial will be filmed and released offline, according to Fall, while a selection of sessions will be shown by the Senegalese state broadcaster RTS.

If Habre is convicted, he can expect anything from 30 years to life with hard labor, to be served in Senegal or another African Union country.

After sentencing a second phase of the hearings would rule on civil compensation claims.

Assane Dioma Ndiaye, a lawyer for the civil parties, described the case as "historic" and underlined the "huge expectations" of the victims.

"There could have been no impunity in this case," he said.

Clement Abaifouta, of the Association of Victims of Crimes of the Regime of Hissene Habre, has come to Dakar with the hope of finally understanding the reasons for his arrest 30 years ago and his four years of unimaginable suffering in custody.

Abaifouta became known as "The Gravedigger" as he was forced daily to bury the victims of torture, starvation and other abuses among his fellow inmates.

"Up to today, I don't know the reason why I was arrested," he told AFP.