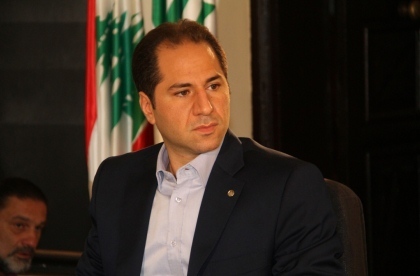 Kataeb party leader MP Sami Gemayel stressed on Wednesday that the time has come for popular accountability against the dump collecting company Sukleen “which has been taking Lebanon hostage for over 20 years.”

“The contract of Sukleen was extended several times since the last tender in the 1990s until today. It is time for popular accountability for a company that has been taking Lebanon hostage for over 20 years,” said Gemayel in a press conference on the waste management crisis.

The government signed a contract with Sukleen in 1994 for collecting and transporting the garbage in Beirut and Mount Lebanon. The contract has been extended several times since for lack of any substitute.

“We have seen waste spreading all over the streets only when the contract of that company ended, which proves the existence of a scheme to keep the situation as it has and to keep the systematic theft of municipal funds,” he added.

“Fees for the company are directly deducted from the revenues of the municipalities and without the latter's permission.”

“There is a mafia taking advantage of the waste file and making profits at the expense of the Lebanese. Sukleen saw it better to drown the citizens in waste in order to use it as a pressure card on the government to extend its contract,” said Gemayel angrily.

He assured that the state must “find places to dump the waste that should be sorted beforehand for easy recycling.”

Emphasizing that the current means of dumping waste material contaminate the groundwater and air, he stated: “We cannot keep doing the same thing for another 20 years.”

“We are trying to improve the letter of conditions to attract new companies. We have also asked the state to purchase landfill locations, to specify the rate at which they should be filled and to directly supervise the work of those companies.”

Beirut and Mount Lebanon were plunged in a waste disposal crisis following the closure of the Naameh landfill last week in accordance with a government decision.

The closure caused trash to spill out of dumpsters after Sukleen failed to dispose of waste following the landfill's closure.

It said it can no longer fill up its premises with accumulated trash.

Blablabla works there, maybe he would know.

blablablabla you are needed back at the boardroom. Wall street analysts are calling on you to deliver the quarterly earnings call for your multitude of companies.

@insanedjadja, what a coincidence, Blablabla it seems always comes with some luggage, yesterday though the trolls had different names, why ka zalmeh?

1anonymetexasus
Sami Gemayel says: "We are trying to improve the letter of conditions to attract new companies. We have also asked the state to purchase landfill locations, to specify the rate at which they should be filled and to directly supervise the work of those companies"
This is too vague. What are the details please and let him give us facts on how the current conditions only favour Sukleen.
Moreover, using terms like "mafia" and "hostages" is populist and should not be used by young Mr. Gemayel. He should concentrate instead on solving problems instead of talking rubbish a la Aoun or Nasrallah.

Problem 1anonymetexasusa is that I had hope in Sami Gemayel but post elections,he looks more like the same old same old.
No scientific and smart problem solving or political discourse. Just shouting and speaking rubbish.

blabla....
Please stop being anti business. Using the "mafia" word is so Lebanese pop that it means nothing.
If Sami Gemayel or blabla... think that there is a case against Sukleen than sue them but stop slandering because you "feel" they are bad or because Najah Wakim or NTV tells you they are bad.
Sue or shut up.

Did your "threatened" friends sue? Don't think so!
Must have been a "rubbish" business plan and they could not get any funding bust instead of telling you that they failed, they told you that they were threatened...sexier.

blabla...
You obviously have your facts wrong. Who is Philippe Sukkar????
The owner is Maysara Sukkar and they have operations in Europe, the GCC and Africa...
I am not saying that their operation in Lebanon is clean but anyone operating in Lebanon needs to bribe his way through.