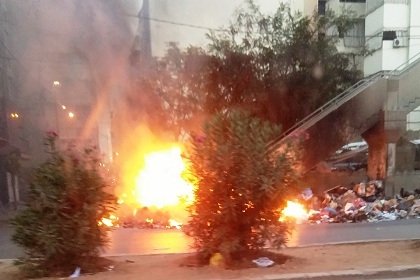 A vehicle from the Beirut Fire Brigade has since arrived at the scene to put out the flames, NNA said.

Outside Beirut, a number of young men tried to block the eastern lane of the vital Damour highway with burning tires before being dispersed several times by security forces, NNA said.

The key highway connects the capital Beirut to the South governorate.

Earlier in the day, protesters reopened the coastal highway in the Jiyeh area after receiving pledges from officials that no garbage trucks would be sent to the Iqlim al-Kharroub region.

Several demonstrators and policemen were wounded in the morning during an attempt by security forces to reopen the highway by force.

Trash collection had partially resumed in Beirut on Sunday but several streets are still overflowing with waste and the air is filled with the smell of rotting garbage.

The crisis started after residents living near the Naameh landfill, the country's largest dumpsite, shut it down.

The government pledged last year that Naameh landfill would be closed on July 17 and an alternative site be found.

But the date came and went with no solution found and residents began blocking the route to the site in the mountains outside Beirut.

Initially, Beirut's trash collector, the Sukleen firm, stored waste at its facilities, but by July 20 they were at capacity and garbage began piling up in the streets.

Experts have urged Lebanon's government to devise a comprehensive waste management solution that would include more recycling and composting to reduce the amount of trash going into landfills.

If only these fools knew what they were breathing, poor Lebanese, his very own worst enemy now.