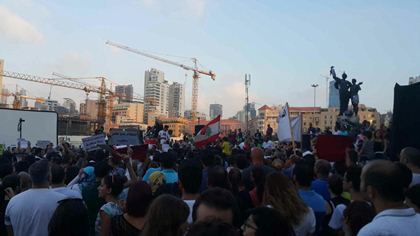 “You Stink" campaign activists held a protest in downtown Beirut on Saturday to shed light on the country's ongoing waste management crisis and to pour their anger on officials for failing to find a solution to the problem.

The demonstrators, who gathered in Martyrs Square, criticized the authorities for lacking the ability to resolve the garbage crisis that erupted when the landfill in the town of Naameh, south of Beirut, was closed on July 17.

The sweltering heat and the stinking, rotting garbage in Beirut and Mount Lebanon provoked the outcry from the activists who said the officials should be held accountable.

They called for the resignation of Environment Minister Mohammed al-Mashnouq and shouted “the people want to bring down the regime.”

“We are here today because we are fed up and we can no longer see our country being robbed by corrupt” officials, said a statement read by one of the activists.

The statement called for the collection of waste piling up on the streets as temperatures rise and the country's infamous electricity cuts worsen.

The protesters vowed not to back off on their demands and said they will hold more demonstrations.

Lebanon's waste management company Sukleen is making a random collection on small scale, taking trash to two temporary landfills, including one near Rafik Hariri International Airport. But those have started to fill up. Nearby municipalities have refused to accept the garbage of Beirut and Mount Lebanon.

Some people have taken to paying for private pickup truck owners to collect the garbage in front of their homes, who dump it at night in unknown locations. The country has long lacked recycling services or even basic trash sorting, exacerbating the problem.

Germany has offered to export Lebanon's trash by sea — an offer the government said it was studying along with proposals for long term solutions such as garbage incinerators and developing new landfills.

But it does not seem to be in a hurry, postponing the issue from one cabinet meeting to the next.

Finally someone is rising against the oppressive government...I'm joining next time...down with aoun geagea said and nasrallah...I hope one day they think of us rather than their pockets...

FYI, Geagea is not part of the government.

pay any independent contractor (except Sukleen) by the tonne for collecting the trash and send it overseas! Enough of these mafia companies taking the Lebanese people as hostages! but this will never happen unless "our" politicians get a cut!

seems so obvious that its a political game, why loose our health over them