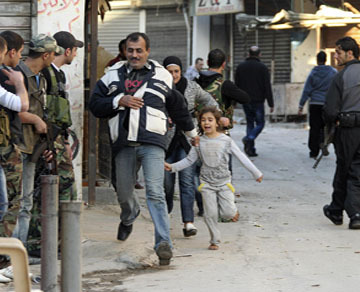 Violent gunbattles erupted Monday evening in the Ain el-Hilweh Palestinian refugee camp in Sidon between members of the secular Fatah Movement and Islamist militants, in a renewal of the violence that had first erupted on Saturday.

State-run National News Agency said Fatah member Fadi K. was killed and at least three people were wounded in fighting involving the use of rocket-propelled grenades, machineguns and flares. According to Future TV, mortar shells were also fired during the clashes.

“The sounds of RPG blasts are echoing across the city of Sidon,” NNA said.

LBCI television quoted Palestinian sources as saying that the battle started after “fundamentalist (Islamist) militants tried to advance towards some Fatah positions.”

“What's happening is a response aimed at halting their advance,” the sources added.

NNA said some gunshots reached some Sidon neighborhoods that are close to the camp.

“Some families are fleeing en masse while others are urging the relevant parties to evacuate them after they were trapped in the camp,” the agency added.

Ain el-Hilweh has been the location for the settling of scores between several factions, and a breeding ground for extremist groups because of the poverty there.

Most Palestinians live in squalid conditions in the country's 12 official camps.

The Lebanese army does not enter the camps, under a tacit deal agreed after the 1975-1990 civil war. Palestinian factions are responsible for security.

round up all these Aholes, put them on buses and drop them off at the border with Isreal

When you sleep with dogs... you wake up with flees. You let them in and harbored them, now you have to deal with them just like everyone else.