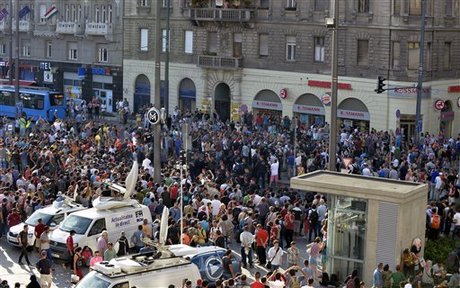 Hundreds of migrants stormed Budapest's main international station early Thursday after police re-opened it following a two-day standoff only to find that train services to western Europe had been suspended.

The main entrance was re-opened around 08:15 am (0615 GMT) and migrants burst in, rushing towards a train standing on one of the platforms, pushing, shoving and fighting with each other to get on board.

A public announcement said however that the train -- meant to travel to Sopron near the Austrian border -- would be going nowhere, and that no trains for western Europe would be leaving Keleti station "for an indefinite period".

"In the interests of rail travel security the company has decide that until further notice, direct train services from Budapest to western Europe will not be in service," Hungarian Railways (MAV) said in a statement.

A MAV spokesman told state news agency MTI that "passengers wanting to travel to western Europe can only take trains leaving from the northern and western borders and with an external rail company."

Around 30 police then arrived and lined up along an adjacent platform, spaced a few metres apart. People were still hanging out of the doors of the stationary train despite being told to alight.

There were bewildered and exhausted-looking families with young children, many of whom have been camped out for days in a makeshift refugee camp below Keleti station. People were carrying luggage and fathers carried young children on their shoulders.

Hungary is a key jump-off point for tens of thousands of migrants entering the European Union, with some 50,000 entering the country in August alone and 150,000 this year, already three and a half times the total for 2014.

Most enter from non-EU Serbia having trekked up from Greece through the western Balkans, with a recently completed razor-wire barrier failing to stop the inflow.

A total of 2,061 were intercepted overnight, including 389 children, police said Thursday. Most were Syrians, Afghans and Pakistanis. Practically all want to travel onwards to western European countries, particularly Germany.

On Monday, Hungary allowed several thousand to board trains for Austria and Germany but the following day Keleti station was closed to anyone without an EU passport or a valid visa.

The move left around 2,000 men, women and children stranded around the station or in the underground "transit zone", where thousands have been sheltering on blankets in cramped conditions, looked after only by Hungarian volunteers.

Several hundred of the migrants had staged demonstrations over the past two days, chanting "Germany! Germany!". There were a number of scuffles between the migrants and riot police.

Nizamuddin, 31, an Afghan who worked as an interpreter for the U.S. army for four years and wants to claim asylum in Germany, fought his way onto the train but had to get off.

"I slept for about two hours last night. It was very cold and windy last night and I had no blanket. My body was shaking," he said.

"I last showered four days ago. I haven't changed my shirt for four days and my trousers for 15 days. Smugglers took my bag and my cellphone," he added.

Why don't they go to Saudi Arabia,Kuwait,Dubai, All these muslim countries are much richer and have more resources to handle their brothers why send them to Christian countries unless that's the plan to ISLAMIZE the world.

https://m.youtube.com/watch?v=XrTk1uj3ByE
For brain dead, wake up.

Ilan Kordi, can be your sun, brother or even you.

NOCK NOCK Cheap shorizo, BEING FOOL IS A BLESSING, in your case, mixing up Hizbolah of Iran with assad murders with a demographic problem means nothing, Comments that shows a lost person that lacks a lot of facts, if he really knows this will be worst.