Aoun Suggests Proportional Representation Law Based on 15 Districts, Says Most Parties Back It 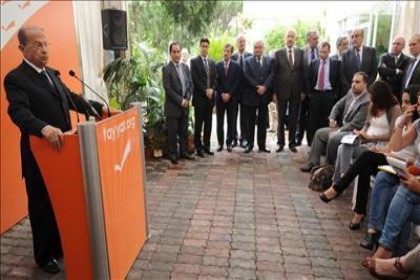 Change and Reform bloc leader MP Michel Aoun on Tuesday suggested devising a law for parliamentary elections that would be based on proportional representation and 15 electoral districts, noting that most parties who took part in Tuesday's dialogue session supported his proposal.

"During today's dialogue session, all parties spoke of the next president's characteristics and some talked in general about the people's problems,” said Aoun after the bloc's weekly meeting in Rabieh.

“I said that there is an accumulation of crises, especially in the country's political life. It resulted from the extension of the parliament's term due to the absence of an electoral law, the thing that aggravated the problems,” he added.

Aoun stressed that “there is no law that stipulates electing a president before electing a parliament.”

“Who said that the president must be elected before the parliament? Let us return to the people, the source of authorities, and devise an electoral law based on proportional representation and 15 electoral districts,” he added.

Noting that the 15-district proposal had been endorsed by Maronite political leaders during a summit in Bkirki, Aoun pointed out that the “vast majority” of dialogue parties described it as the “only solution” -- except for al-Mustaqbal bloc chief MP Fouad Saniora.

The last legislative elections were held in 2009, and parliament has twice extended its own mandate, citing internal political divisions and regional instability as justification.

The country has been without a president for more than a year, as a divided parliament has been unable to fill the post despite meeting more than 20 times.

Aoun, one of the main presidential candidates, had suggested electing a president by a popular vote. His statements on Tuesday, however, indicate that he has backpedaled on the controversial proposal.

Aoun: Who said that the president must be elected before the election of a new parliament?

Whatever law is concocted, does aoun think he and his allies will garner 2/3 majority votes in parliament? In fact, neither M14 nor M8 will ever get the 2/3 majority in parliament necessary to convene a presidential parliamentary session, and back to square one. Aoun knows this and all his obstruction has been aimed at getting concessions for himself and his family.

Listen very carefully General Aoun has a brief but very important message he will say only once..

To Whom It May Concern
I, the_roar, a well respected, heavily voted, liked, and admired shia poster with 57 accounts (3rd generation Australian) on naharnet hereby declare that until further notice I suspend my membership in this forum similar to what MP Emile Rahmeh ( who got the highest votes in the last elections ) did when he suspended his membership in the Lebanese Parliament in SOLIDARITY with the unlawful, unjustified, and oppressive decision by the administration of this forum to ban my fellow shia poster Flamethrower.
Let it be know to all that such practices by management contradict with the basic fundamentals of the Iranian constitution and free speech in North Korea.
I remain,
Signed
the_roar

Please do not insult the rat

M14 won the majority of MP's during the last Parliamentary elections in 2009. This Parliament, which was elected in 2009, is the Parliament that was stipulated by the Constitution to elect the next President.

Aoun and Hezbollah know that they cannot win the Presidency under the 2009 elected Parliament, which is why they have neglected to fulfill their constitutional duties to attend the voting sessions. It is also why they want to change the Parliament before voting for a President.

The problem for them is the Constitution does not allow for a new parliament before electing the President. And the constitution requires a 2/3 majority to approve any change in the electoral law.

In the absence of an agreement on a new election law, which requires 2/3 approval, extension is better than vacuum. Vacuum is what Hezbollah prefers

Bassil is the future president of Lebanon, Ladies and Gentlemen

Don't be ridiculous, Bassil has got more chance of becoming president the future movement than president of Lebanon

This is wonderful to see. After the nuclear deal and the thawing of US and Iranian relations he was able to get a US visa and go on a well deserved vacation. I'm even more glad that he's able to go out in public in civilian clothe like that without his usual costume.

They're the same coin.

hello -phoenix1
My name is wise.guy and I like to introduce myself. I am another mutation of mowaten who asks me to post, vote, and mass report on his behalf. I have no questions for you.

Cohen Ainu and Bassil stop buying cloth at a children's store, I might consider them for a presidency. Until then go home (Iran) you unless trader.

Norma.jean
Your comments are intelligent and describe the real situation of Houthis who have gone back to stone age and want to take others with them....Ba3ed Na2is...

Before the start of this national dialogue mr Sami Gemayyel insisted on the presidency to be discussed first. Now after jumping into other issues mr Gemayyel says that he is sensing a trap.
MR GEMAYYEL,
Please be assured there is a trap. The only way to avoid it is to withdraw from such comedy.
Presidency was the first issue in the dialogue. It should be solved before cunningly passing to different ones.
If approved the new electoral law will be the base. With new electoral law or without, elections cannot be fair amid this chaos.
Presidency first full stop.

A nation of sheep will beget a government of wolves

Art. 74 of the Lebanese Constitution:
"If the presidency becomes vacant because of the death of the President, or his resignation, or any other reason, the Chamber convenes immediately by law to elect his successor, and if the presidency happened to be vacant, while the Chamber of Deputies is dissolved, the electoral bodies are summoned to convene without delay, and the Chamber is legally convened, immediately as soon as the elections have taken place."

Art. 75 of the Lebanese Constitution
"The Chamber convened to elect the President of the Republic, is considered an electoral body, not a legislative body, and must proceed immediately for the election of the Head of State without any discussion, or any other matter."

This is where in the Constitution it states that the Parliament cannot convene for any other purpose but for the election of a President when the office is vacant, as it is now and has been since May 2014.

The idea of changing the constitution so that Aoun can suffer an electoral defeat by the vote of the people themselves cannot be accomplished unless Parliament adopts a constitutional amendment, which it cannot do when the office of President is vacant, it can only operate as an electoral body and not as a legislative body.

And Mr. Berri, as Speaker who wants to have dialogue over the issue is himself violating the constitutional provision which provides that the Parliament MUST proceed to IMMEDIATELY elect a head of state WITHOUT ANY DISCUSSION. Mr. Berri further violates the constitution by not compelling those who are boycotting his call for an electoral session to appear and to vote.

Mr. Aoun, who holds himself out as the paradigm of law and order, accusing others of being criminals, is himself proposing to become president by unconstitutional means, probably because he fully realizes that under the present law and the present Parliament he cannot become elected President. In no civilized society does one have the power to stop the constitutional electoral process when it appears that they cannot not win. No where is that the rule, only in narcissistic Lebanon is this tolerated.

If we all were to stop commenting on Aoun, maybe then he would realize that we just don't care about him and his narcissistic thinking?