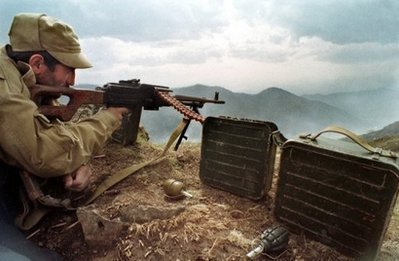 "Three Azerbaijani soldiers were killed in heavy fighting" with Armenian forces across the frontline of breakaway Nagorny Karabakh, Azerbaijan's defense ministry said in a statement.

Yerevan and Baku are locked in a decades-long conflict over the breakaway region of Nagorny Karabakh, a Yerevan-backed ethnic Armenian enclave in Azerbaijan.

In an escalation unprecedented since the 1994 ceasefire, both sides have reportedly used large-caliber artillery in tit-for-tat attacks in recent days, raising the specter of a new all-out war.

On Saturday, Armenia threatened Azerbaijan with "retaliatory" artillery and rocket strikes, and accused Baku of breaching the shaky truce.

Yerevan had said Thursday that Azerbaijan shelled its territory with large-caliber artillery, killing three civilian women, while on Friday, the ethnic Armenian rebel authorities in Karabakh accused Azerbaijan of killing four of its soldiers.

Azerbaijan's foreign ministry accused Armenia of "turning civilians into a target by deliberately stationing its firing positions in and around civilian facilities to shell positions of the Azerbaijani armed forces."

International mediators to Karabakh peace talks held under the aegis of the Organization for Security and Cooperation in Europe on Saturday "condemned in strong terms the use of artillery that caused additional casualties," and called on both countries to "accept an OSCE mechanism to investigate ceasefire violations".

Armenia -- backed by Russia, which sells weapons to both Baku and Yerevan -- says it could crush any offensive.