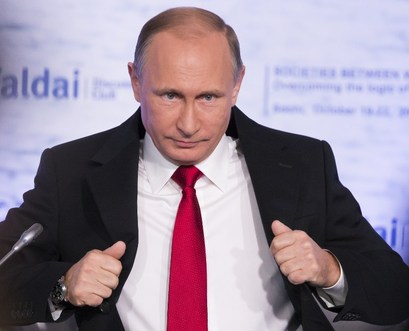 Russian President Vladimir Putin on Thursday accused the West of playing a "double game" with terrorist groups in Syria, where both Moscow and a U.S.-led coalition are conducting separate bombing campaigns.

"It's always difficult to play a double game: declaring a fight against terrorists while simultaneously trying to use some of them to arrange the pieces on the Middle East chess board in one's own interests," Putin said at a meeting of political scientists in Sochi known as the Valdai Club.

"It is impossible to prevail over terrorism if some of the terrorists are being used as a battering ram to overthrow undesirable regimes," Putin said.

Russian Foreign Minister Sergei Lavrov is set to meet U.S. Secretary of State John Kerry, as well as their Turkish and Saudi counterparts, in Vienna on Friday for crucial talks on the Syrian conflict, a four-year war that has killed more 250,000 people and forced millions from their homes.

The high-level meeting follows the surprise visit of Syrian President Bashar Assad to Moscow for talks with Putin on Tuesday, the embattled leader's first foreign visit since 2011.

Russia -- which has pledged to support Damascus militarily, much to the West's dismay --  has insisted the air strikes it has conducted since September 30 in the war-torn country are hitting the Islamic State and other "terrorist" groups, and are being conducted at the Syrian leadership's request.

But the U.S. and its allies, who are conducting a separate bombing campaign in the country, say Moscow's strikes are aimed at Western-backed moderate rebels fighting Assad.

"There is no need to play on words, to classify terrorists are moderate and non-moderate," Putin said.

"What is the difference?" he said, suggesting that "in the opinion of some experts... so-called moderate bandits behead people moderately or gently."

During his encounter with Assad, Putin called for a political solution involving all groups to try to end the war, the Kremlin said.

Kremlin spokesman Dmitry Peskov later declined to comment on whether Assad's future in Syria had been discussed during the encounter.

Assad, who last visited Russia in 2008, told Putin that the three-week Russian bombing campaign had helped to stop the spread of "terrorism" in his country.

While the Syrian leadership sang the praises of Moscow, the White House castigated Russia's intervention, calling it "counterproductive."

Russia's defense ministry said Thursday it had struck 72 "terrorist" targets in Syria over the past 24 hours, claiming to have destroyed the combat capability of the main terrorist groups operating in the country.

"As a result of Russian air strikes, the main forces of terrorist groups, made up of the best trained terrorists, have lost combat capability. Their command and resupply system has been disrupted," senior military official Andrei Kartapolov told Russian news agencies.

Kartapolov said the strikes -- which targeted the provinces of Hama, Idlib, Latakia, Damascus, Aleppo and Deir Ezzor -- had destroyed a bridge over the Euphrates River used for moving supplies to fighters from neighboring Iraq.

Putin said that strikes had given a "positive result" but added: "Is it enough to be able to say that terrorism in Syria is defeated?  No, we need to make more serious efforts in order to make such a claim."

He praised Russian pilots carrying out strikes as "all heroes," saying: "I am proud of them."

Russian Foreign Ministry spokeswoman Maria Zakharova denied Thursday an earlier report by the Syrian Observatory for Human Rights that at least 12 people including medical staff were killed when Russian warplanes struck a field hospital in the northwestern province of Idlib.

The Russian strikes are reported to have killed 370 people so far, a third of them civilians, the British monitoring group said Tuesday.

Humanitarian organizations have deplored the effect of the bombing campaigns, with the International Committee of the Red Cross saying air strikes in Syria were disrupting the delivery of desperately needed aid to civilians.

Since the start of Moscow's intervention, Russian planes have carried out 934 sorties that have destroyed 819 "terrorist targets," Kartopolov said.

Do not try to do too much with your own hands. Better the Arabs do it tolerably than that you do it perfectly. It is their war, and you are to help them, not to win it for them. ( by Lawrence of Arabia) that's how West see the case, while the mother Russia who defeated the same decease back in 13 century, has accepted the battle with the 21centure "tatar!!!" military invasion to invade and conquer Europe and the middle east... I hope you will understand the parallel. Have a zatar pie with the cup of tea for your breakfast. Peace!

He is trying to say, that's it we are done.

The truth is that al nusra/others and Isis are two faces of the same coin. Both are al quandary daughters.
By helping al nusra the west will not be able to control them if they win. Exactly like it happened in Lybia and Iraq.
Beside since more than one year all the coalition mighty power claiming to fight Isis didn't succeed. Indeed ISIS has expanded further, proving that more than one country in the coalition are helping ISIS while claiming fighting them (how many times US planes gave arms and munition to ISIS by so called technical error.
Yes I agree with a political solution in Syria ending this blood bath.
The coalition had proved its failure in at least 3 countries. Why not finding a way to cooperate with Russia if it is not for power interests.
By the same talking if Russia is keen to fight terrorism it should find a common ground with the coalition to neutralize Iran that is another terror beast.

@shiapanz
First you celebrated the massacres of Assad and his Barrel bombs. Then, when that did not work you sent your not so mighty hezbollah terrorists and promised the world divine victory after divine victory. Your terrorist leader admitted he sent terrorists to Syria more than 4 years ago to fight what he referred to as Takfiris when 4 years ago ISIS was not even present yet. Your hezbollah incurred loss after loss and terrorist after terrorist. Then it was Iran, the shia Pakistanis and shia Afghanis and now the russian thugs and their cluster bombs.

Just want to assure you that your little cute mahdi and his 313 supporting cast is not coming back on top of a russian tank. It only happens in movies.

another of sectarian mowaten's many many accounts.
Pure filth

We heard the same old tune when Iran and Hezbollah went into Syria almost 5 years ago. The facts on the ground saw Assad losing more than 70% of Syria to the rebels. Nothing new here...

you must be kidding right? anonyme now is me too? hahaha

typical propaganda speech... anyone believing him must be naive...