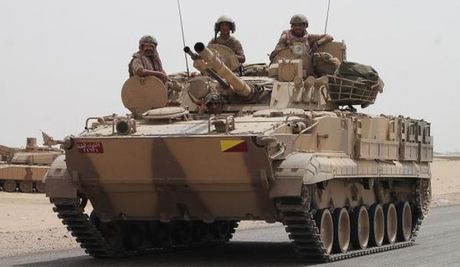 A 400-strong Sudanese force arrived in Yemen's port city Aden Monday in support of pro-government forces preparing to confront a possible new offensive by rebels on the country's south.

Yemen's loyalist forces, backed by Saudi-led coalition strikes, supplies and troops, pushed the rebels out of Aden as part of an operation launched in July to take back southern territories lost to renegade forces.

But the Iran-backed rebels this weekend retook several positions in the south.

"More than 400 Sudanese soldiers landed in Aden" as part of the coalition battling the rebels since March, said a commander of Yemeni forces loyal to Hadi.

These will join 500 Sudanese soldiers who arrived in Aden on October 19, part of whom were deployed in the main southern city and the strategic Al-Anad airbase in adjacent Lahj province, the source told Agence France Presse.

Their arrival comes amid a mobilisation of loyalist forces to block a possible attempt by the rebels to re-enter Aden.

"General mobilisation was been declared in Daleh," where the rebels recaptured the province's second-city, Damt, on Saturday, a local official told AFP.

A similar call was made in the coastal city of Dhubab, near the Bab al-Mandab strait, where the rebels achieved a "limited advance" during the weekend, a military source said.

The rebels seized a military base in Dhubab on Saturday following deadly clashes with pro-government troops, according to military sources.

Pro-government troops seized Dhubab early last month, giving them effective control of Bab al-Mandab, through which much of the world's maritime traffic passes.

The rebels overran the Yemeni capital Sanaa last year and then advanced south to Aden, forcing Hadi and his government to flee to Saudi Arabia.

Ministers from Hadi's government returned to Aden in mid-September after six months in exile in the neighbouring oil-rich kingdom.

The United Nations says that around 5,000 people have been killed in Yemen's conflict since it escalated in March.

as you just said: peanuts.
they are not doing it for the money, but for a just cause.

i thought you agreed the other day that ISIS and the likes must be eradicated, but you keep whining everywhere (even on unrelated articles like this one) that hezbollah is fighting them in syria.
would you prefer for them to wait until isis is in beirut to start acting?

in comparison, sudanese soldiers have no reason to be in yemen except for the saudi money. it's not like the houthis are going to invade sudan or place booby-trapped cars in their streets.

first it's pretty revealing that you defend fighting for money versus fighting for a cause, after all those you support are all mercenaries and whores of saudis

and second, no, families of hezbollah martyrs are taken care of, your fantasies about them becoming beggars/prostitutes are like everything else you say: baseless claims and random BS

This is a pretty good conversation so far, but the central issue here remains that Article 24 of the Lebanese Constitution prohibits majority rule, thus disenfranchising the Shia majority.
When you have arbitrary restrictions like that, and Israel's "Jewish democratic state", and KSA/Emirate/Qatari monarchies, which are three versions of the same thing--arbitrary rule--that apparently produces all kinds of spin-off oddities like where Sudan sits in the strategic map.

stop fantasizing, i dont need to use another account to tell you what i think.

i dont really care whether you do, your opinion never mattered to me anyway.