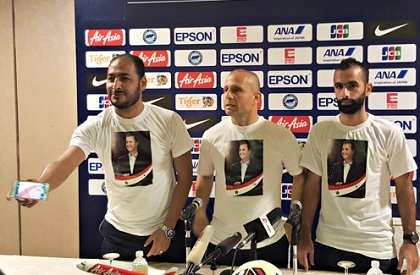 Syrian coach Fajr Ibrahim and midfielder Osama Omari strode into the media conference at a hotel on Monday ahead of their match against Singapore clad in white t-shirts with a large photo of their embattled president, saying Assad was "the best man in the world."

"This is our president Bashar Assad, whom we are so proud of because this man fights against terrorists of the world, and he fights for you also," said Ibrahim, according to local media.

The Straits Times quoted Ibrahim as saying that Assad is a keen supporter of the team.

"Our president follows us every step. He supports us, we play for our country and for him also," he was quoted as saying.

Asked if wearing the t-shirt was a political statement, the coach said: "He is my president, this is ours, I don't care about French or any other, I care about my country."

Following the incident, some Singaporean football fans urged the Syrian team to leave politics out of the night's match.

"Making political statement is NOT sportsmanship!" wrote one reader in reaction to a report of the incident on a news website.

Another reader wrote: "Only football please, no politics."

France has carried out air strikes against the Islamic State group in Syria since September but stepped up its raids after Friday's attacks in Paris.

Islamic State claimed it had attacked Paris in revenge for the French campaign of air strikes in Syria.

Western and Arab countries want Assad, who has been fighting an uprising since 2011, removed to allow what they say would be a transitional government that can unite the country.

But Russia, carrying out air strikes against Syrian rebels since late September, is sticking by Assad along with Iran, a longtime ally since Damascus sided with Tehran against Iraq's ousted leader Saddam Hussein in the 1980-1988 Gulf War.