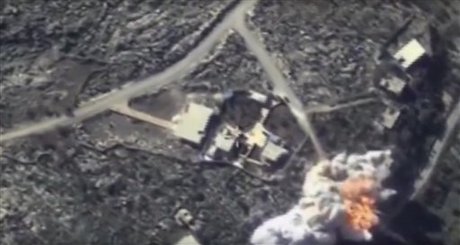 Russian warplanes carried out heavy raids in Syria's northern Latakia province on Wednesday, a day after Turkey downed one of Moscow's jets in the area, a monitoring group said.

Warplanes believed to be Russian also carried out strikes near the Turkish border in northern Aleppo province, killing at least three people and setting alight several trucks carrying aid and goods for sale, the monitor and activists said.

"Russian warplanes have since last night been carrying out heavy air strikes on the Jabal Akrad and Jabal Turkman regions" in the north of Latakia province, Syrian Observatory for Human Rights chief Rami Abdel Rahman said.

He said Russian planes had carried out at least 12 strikes in the area since the morning, but had no information on any casualties.

A media activist on the ground confirmed the heavy strikes, which he said centered around the Jabal Nuba area where rebels on Tuesday destroyed a Russian helicopter that was forced to make an emergency landing by opposition fire.

One member of the crew was killed but the rest were rescued.

State television reported that Syrian warplanes were also carrying out strikes in the north of Latakia, a coastal province that is largely controlled by the regime.

In recent days, regime forces have been waging fierce battles against rebels in the northern part of the province, making some advances in Jabal Akrad and Jabal Turkman.

On Tuesday, Turkey shot down a Russian aircraft over the province, and rebels killed one of the pilots as he parachuted down after ejecting from the plane.

A second pilot was rescued by Russian and Syrian special forces.

Russia launched strikes in support of Syrian President Bashar Assad on September 30, over a year after a U.S.-led coalition began strikes in the country against the Islamic State group.

In northern Aleppo province meanwhile, apparent Russian air strikes hit the town of Azaz and the border area around the Bab al-Salama crossing, the Observatory said.

The monitor and local Syrian activist Maamun al-Khatieb reported three people killed in the strikes, which also set fire to several trucks parked in a lot not far from the crossing.

"Three people have been killed and six injured, most of them are truck drivers," Khatieb told AFP.

He said the trucks were carrying aid and goods for sale, and were parked in a lot where vehicles gather after crossing the border, around three kilometers (1.8 miles) away.

The Observatory and Khatieb said the region had not been subject to air strikes by either Russian or Syrian war planes in some time.

IS is not present in the area.

and for sure for sure Putin is bombing ISIS in Jabal Akrad and Jabal Turkman regions ;)

Bombing terrorists. They are all the same. Or is shooting at parachuting pilots then gloating over their bodies the measure of 'moderate' 'peaceloving' Turkoman 'farmers'? If they were just growing turnips why are they all armed and dressed in military fatigues?

they are defending themselves from assad and hezbollah terror. The same can be said of the dahieh residents who are all armed and dressed in military fatigues? Therefore, the bombing of dahieh is also justified.

If they were just growing turnips why are they all armed and dressed in military fatigues?

maybe you forgot there is a civil (global) war raging in Syria or do you want them to dress in Armani suits?

No, he is bombing ISIS former allies from Al-Qaeda, Turkmen and other islamist like coastal division, foreign sponsored proxies who killed russian pilot and one marine with US supplied weapons. ;)

Time to die takfiris. Yes the same moderates takfiris that killed the Russian pilot whilst he was parachuting.

FSA has confirmed own war crimes and now Putin has carte Blanche do destroy them ;)

did you see those turkmen savages? they were praising their allah around a dead body, no different then isis if it wasn't isis. all the same garbage. islamist

where is Mary ya Abbas?