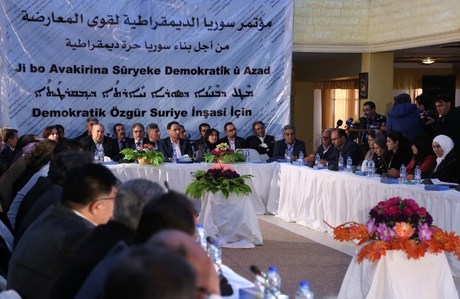 Kurdish factions and other opposition groups gathered Tuesday for a meeting in northeastern Syria, saying they most deserved to set its post-war vision after staying in the country throughout its conflict.

Dozens of Kurdish, Arab and Assyrian figures met in the town of al-Malikiyeh, in Hasakeh province, to launch the two-day "Syrian Democratic Conference".

Participants included members of Syria's leading Kurdish movement, the Democratic Union Party (PYD), which has been excluded -- along with its armed affiliate -- from another opposition conference this week in Riyadh.

"The forces that defended the people, suffered the events in Syria and remained on the ground are those most deserving to solve the crisis in Syria, without any interference from the interests of regional powers," said Wael Mirza, an Assyrian representative.

Talks on a decentralized political system for Syria, the leading topic of discussion, as well as the fight against extremist groups will carry into Wednesday.

The PYD and other Kurdish groups already lead an autonomous administration in parts of northern and northeastern Syria.

Kurdish groups and allied rebel forces have been at the forefront of the battle against the Islamic State jihadist group in Syria's northeast.

Talal Sello, spokesman for the anti-IS Syrian Democratic Forces alliance, said the meeting in al-Malikiyeh was the "political face" of the SDF.

He criticized the Saudi-led summit, set to begin Wednesday, as a "conspiracy" because it did not invite Kurdish forces.

The meeting was the first time opposition groups and Kurdish factions discuss Syria's future in an area outside regime control.

"This is the first time since the beginning of the crisis that a conference for the national opposition is held inside Syria, in areas liberated from the despotic regime and from terrorism," said conference organizer Abdulkarim Omar.

Syria's conflict began in March 2011 with peaceful protests against the rule of President Bashar Assad, but it has since devolved into a multi-front civil war that has repeatedly stymied diplomatic efforts.

International talks in Vienna last month produced an ambitious timeline aiming to bring Syria's regime and divided opposition together for negotiations next year.

Nebras Dallul, another conference organizer, told AFP, "We're preparing ourselves for any negotiation process. We're picking up the fragmented pieces of the Syrian opposition that believes in a political solution and a democratic, civil state."