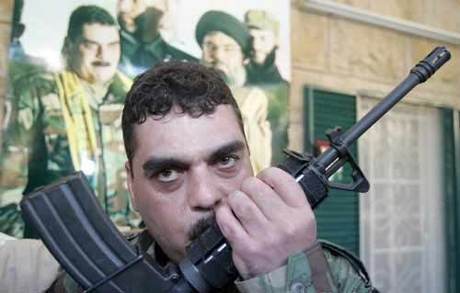 Hizbullah figure Samir al-Quntar was killed in an Israeli air raid near the Syrian capital, media reports said on Sunday.

Israeli warplanes targeted a building where Quntar and a number of his companions were residing in Hay al-Homsi in Jarmana southeast of Damascus, killing an unidentified number, media reports said.

Witnesses said that three missiles were launched at the residential building and led to its total collapse, killing six individuals and wounding another twelve.

Media reports close to Hizbullah said that Israeli warplanes carried out raids on the said location, killing at least nine individuals and an unidentified number were wounded.

Al-Jazeera, al-Jadeed, and Russia Today said that an Israeli air raid at dawn on Jarmana in Reef Damascus led to the killing of Hizbullah figure Samir al-Quntar and other members.

At dawn, Journalist Bassam al-Quntar, mourned his brother Samir in a tweet on Twitter saying: "We are proud to have joined the long list of families of martyrs."

Moreover, Hizbullah issued a statement early on Sunday confirming the news, saying he was killed on Saturday "when the Zionist enemy planes bombed the building where he lived in Jarmana."

Al-Manar TV aired footage of what it said was the residential building targeted in Jarmana Saturday night. The building appeared to be completely destroyed.

The Syrian state news agency SANA reported the "martyrdom of... Samir Quntar last night in a terrorist raid on a residential building" on the southern outskirts of Jarmana.

It released a picture showing Syrian pro-government forces standing guard next to a partially collapsed building where Quntar was said to have been killed.

Al-Mayadeen TV said that Farhan al-Shaalan, a senior commander with the anti-Israeli "resistance" movement in the Golan Heights, was also killed in the air raid together with an aide to Quntar.

Quntar was imprisoned in 1979 in Israel after he was convicted of murder in an attack that left an Israeli policeman, a father and his two children dead. He was long wanted in Israel for the attack considered one of the grisliest in Israeli history.

Israel released Quntar as part of a prisoner exchange in 2008, three decades after the killings, and has since become a high-profile figure in Hizbullah.

In September the United States placed Quntar on its terror blacklist, saying he had "played an operational role, with the assistance of Iran and Syria, in building up Hizbullah's infrastructure in the Golan Heights."

RIP Quntar, his death won't go down in vain, Israel will be on edge for weeks waiting for the retaliation that will be coming indeed.

May he RIP
I doubdt there will be any retaliation though

We are still waiting for the retaliation for Imad Moughniyah, been like that for 7 years now. So I guess Samir Qunt have to wait for his revenge. Or wait, was the Burgas terror on women and children on holiday the revenge for Moughniyah?

You praise a child killer? wow you're sick, no better than Israel or ISIS as they do the same.

A baby killer of the worst kind, went to hell to meet his relatives. Thank you IDF for arranging the meeting. Revenge of the small child Satan has not yet created. this was just a reminder from a small baby which the "Big Hero" banged its head into a rock.

Was this thug fighting the Israeli enemy in Jarmana southeast of Damascus or killing syrian civilians. Rot in Hell

How did he fight? by banging a child's head against a rock? big hero ah? his friends in hell are waiting for him.

Where was the russian S400 air defense systems that Ado from Australia wrote a 3 page report about. It seems Russia approved the Israeli air raid that killed Samir Kuntar.....Hahaha

There is no doubt that Takfiris, ISIS, etc...will go to Hell.
But think with me: what is the difference between an ISIS and EBOLA warmonger?
Both are filled with hatred and violence, while God is pure Love.
Both have freely decided to go away from God.
This is the reality of HELL.

But what ever happened to the Russian S-Cockamimi state of the art most advanced technologies ever, seems that they're as limp as the rockets that couldn't make it all the way from Caspian sea to Syria and fell in Iran! Bye bye Kuantan should habe stayed in jail in Israel and kept pursuing you higher education.

One of the filthiest persons on earth, proud of smashing a child skull on a stone with the stock of his weapon. Good riddance indeed.

Thank you for reminding me of this particular episode. You do possess a Historical memory!

Yes, he is now in eternal fires where he is surprised to learn that God did not need a Party and never ordered killings in His Name.

This is fantastic news !!!!! Good riddance and may he rot in hell

to hell with him and his likes: a murderous dirty criminal.

The Southerners who died defending their land and homes from Israeli invasion are indeed martyrs. But not Qantar; he killed children in cold blood. And definitely not the ones fighting in Syria. They are doing so for political gains.

Another one bite the dust, may he rot in hell. By the way mystic, here is another Syrian/Iranian bootlicker you can add to your avatar.

@Mastica, Northern and all Ebola supporters:

Arab children are murdered on a mass scale by the Butcher...your friend...

Ebola and Zionists are similar.

I just finished debriefing Samir and 13 other hizballah mujahideen accompanying him. They came in pretty bad shape mostly in pieces, but I managed to re-assemble them for the debriefing and got some useful information.

You are right: day by day Saudi Arabia is getting closer to Israel. Day by day peace between Arabs and Israel is nearing. Day by day Palestine and Israel are moving towards peaceful solution.
When all that happens, your Ebola will have no more reason to exist...

Arab children are murdered in Yemen and Syria.

He who lives by the sword, shall die by the sword. It was going to happen, just a matter of time.

An empty and fitting death for those who celebrate the culture of death.

Let the parade of "divine" victories keep on flowing.