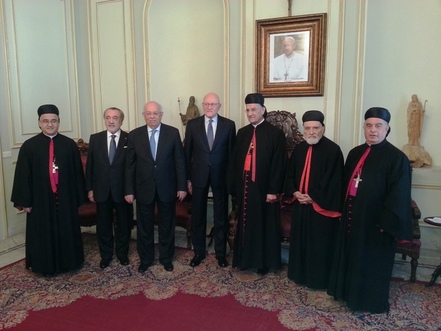 Prime Minister Tammam Salam paid a visit on Thursday to Maronite Patriarch Beshara al-Rahi on the occasion of Christmas, taking the opportunity to highlight the need for national unity in Lebanon.

He said from Bkirki: “We stress the importance of perseverance during this critical time.”

He added that he has never spared an opportunity to call for the election of a president, saying that the patriarch made “significant points” during his Christmas message earlier on Thursday.

“We hope officials would be receptive of this message,” remarked Salam.

“We reiterate the calls to elect a president as soon as possible, and we urge the political blocs to take the presidential settlement initiative seriously,” he declared.

The nomination has been met with reservations from the Kataeb Party, the Free Patriotic Movement and the Lebanese Forces.

Later on Thursday, Salam held talks with Greek Orthodox Archbishop of Beirut Elias Audeh on the occasion of Christmas.

But they have all mortgaged the power to elect a president away to others in exchange for patronage money. So, no President until someone, not depicted in the picture decides on one.

Auon is the number 1 choice