Russia, Qatar to Encourage Syrian Opposition to Talk to Govt 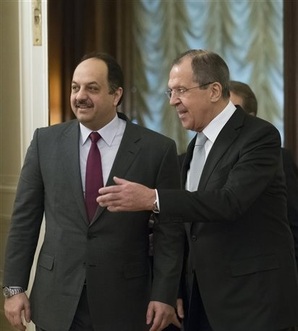 Russia and Qatar have agreed on steps to encourage the Syrian opposition to sit down for talks with the Syrian government, the Russian foreign minister said Friday.

Russia is a staunch supporter of Syrian President Bashar Assad, who Qatar and other Middle East countries accuse of war crimes.

Speaking to reporters after his talks with Minister Sergey Lavrov in Moscow, Qatari Foreign Minister Khalid bin Mohammad al-Attiyah on Friday accused Assad of supporting terrorist groups. Lavrov, meanwhile, insisted that "it's up to the Syrian people" to decide Assad's future.

The Russian minister said the two countries still disagree on Assad's future but added that he and al-Attiyah have agreed to encourage the Syrian opposition to launch talks with the Syrian government.

"We have reached an understanding with our Qatari counterparts about what we can do to help make sure such a delegation (of the Syrian opposition) is formed so the Syrian talks can be effective," Lavrov said.