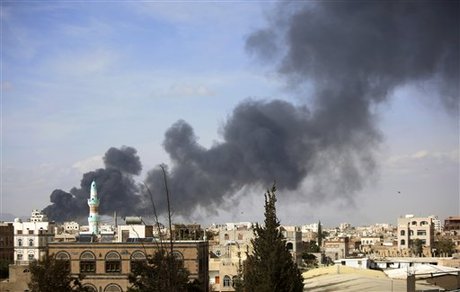 Yemeni pro-government forces on Thursday seized a town overlooking the besieged city of Taez after weeks of deadly fighting with Iran-backed rebels in the area, military sources said.

The capture of Al-Misrakh comes as part of an offensive loyalists launched in November to break the siege on Yemen’s third city, where some 200,000 civilians are caught up in the fighting.

The town is south of the provincial capital, where two days earlier a rebel sniper shot dead a cameraman working for the government-run Yemen TV channel, drawing condemnation from international media watchdogs.

Yemen's National Union of Journalists said in a statement that Ahmed al-Shaibani was killed on Tuesday while he was covering clashes in the city.

Reporters Without Borders and the Committee to Protect Journalists condemned Shaibani's killing and urged all parties in Yemen's conflict to respect the lives of civilians, including journalists.

A Saudi-led coalition has been backing pro-government forces fighting the Huthi rebels and their allies since March last year.

To the west, the rebels have advanced in the Dhubab coastal area of Taez province near the strategic Bab al-Mandab strait following two days of clashes that left 12 pro-government fighters and eight insurgents dead, loyalist military sources told AFP.

Clashes continued in the area on Thursday as coalition jets pounded rebel positions.

U.N. envoy Ismail Ould Cheikh Ahmed told the Security Council on Wednesday that Yemen's warring parties have so far been unable to agree on terms for a new round of peace talks, two months after holding their first face-to-face meeting.

The U.N. envoy said the parties were divided on "whether a new round of talks should be convened with or without a new cessation of hostilities" and were not willing to offer sufficient guarantees that a truce would hold.

"Many parts of Yemen are again witnessing air strikes and extensive ground fighting," said the envoy.

More than 6,100 people have been killed in nearly a year of conflict, about half of them civilians, according to the United Nations.