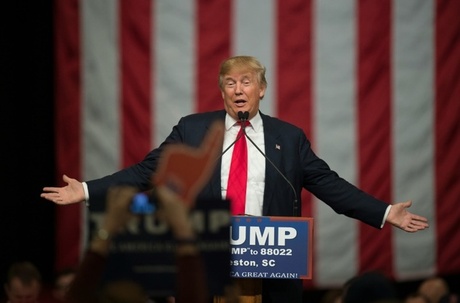 Senators Ted Cruz and Marco Rubio mounted all-out efforts Friday to topple Donald Trump in the war for the Republican presidential nomination, seeking to steal support from the billionaire frontrunner in South Carolina -- and each other.

The state holds its crucial Republican primary on Saturday, and Trump is seeking a comprehensive win that would boost his claim that he is pulling away from his rivals, notably the two first-term senators eager to rein him in.

It is the third state-wide contest in the race for the White House, with Republican hopefuls looking to be the party's candidate on November 8 in the general election.

"This race will be decided friend to friend, neighbor to neighbor, pastor to pastor, South Carolinian to South Carolinian," Cruz told about 800 supporters and others at a theater in downtown Charleston, emphasizing the importance of the ground game.

Locked in a fierce battle for second place with Rubio, Cruz is arguing that Rubio has more to lose in South Carolina, given that popular Governor Nikki Haley, conservative Senator Tim Scott, and prominent congressman Trey Gowdy have all endorsed him.

Cruz adviser Alice Stewart, a veteran of several campaigns, told Agence France Presse that Rubio would be in "serious trouble" if he failed to pull out a victory in the Palmetto State given the backing from "those powerhouses."

"The heat is on Marco Rubio to win South Carolina," Stewart said.

Rubio, speaking at a rally with Haley and Scott at his side, urged voters to choose him because "I will win this election, (and) the Democrats would not want to run against me."

"They know... that we have the ability to unite this country," Rubio told several hundred people at a high school in North Charleston, one of five scheduled stops on the eve of the primary.

Delivering a stump speech in front of a huge American flag, Rubio called for a return to core conservative and Judeo-Christian values, as he lamented the wrong turn the country took seven years ago by electing Democrat Barack Obama.

"You're seeing the American dream slipping away," he said.

- Trump in command -For either Cruz or Rubio to snatch the state from Trump's grasp would be a dramatic upset, by all accounts.

Trump leads with 28 percent support, but the ultra-conservative Cruz is not far behind with 23 percent, according to an NBC-Wall Street Journal poll released Friday.

Rubio is in third at 15 percent.

Highlighting the fierce battle over second-place scraps, and the blood-sport politics that have become a hallmark of South Carolina, Rubio's team warned of potential "primary day tricks" by Cruz.

"We will not allow Ted Cruz to do to Marco in South Carolina what he did to Ben Carson in Iowa," Rubio communications director Alex Conant said Friday, referring to the Cruz team wrongly telling voters in Iowa that Carson, a retired neurosurgeon who like Cruz draws evangelical support, had dropped out of the race.

Critics say Cruz's dirty tactics in Iowa propelled him to a first-place finish in the caucuses, and Conant warned South Carolinians to be "suspicious" of political reports or emails Saturday.

"We fear the worst dirty tricks are yet to come" from Cruz's team, Conant said.

Cruz and Rubio supporters alike argued that lower-polling candidates -- Carson, Ohio Governor John Kasich and former Florida governor Jeb Bush -- ought to drop out to give either Cruz or Rubio a shot of besting Trump.

"At some point, if Trump's going to be stopped, if people want to look at it that way, there has to be a consolidation of the other candidates," Dan Brisker, 69, told AFP as he waited to enter the Cruz rally.

Cruz took a veiled swipe at Trump and his slogan.

"It is easy to say Make America Great Again," he said. "But the question is, do you understand what it was that made America great in the first place?"