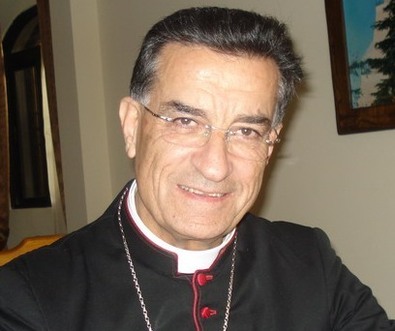 Maronite Patriarch Beshara al-Rahi backed on Tuesday a statement issued by the government to reassure Saudi Arabia and other Gulf states of Lebanon’s commitment to Arab unanimity.

“I support the statement of the cabinet. Lebanon has throughout its history been known as a country with friendly ties with all states,” said al-Rahi at Rafik Hariri International Airport before traveling to Rome.

“In his nature, the Lebanese (citizen) does not have an interest in antagonizing any state,” he said.

“Things should be resolved politically and diplomatically in case there is a dispute with another country,” added the patriarch.

The government voiced on Monday its unanimous and constant support to Arab countries, stressing Lebanon's Arab identity and its role as a founding member of the Arab League.

“We are committed to Arab consensus on the common issues," said a statement read by Prime Minister Tammam Salam after an extraordinary cabinet session held at the Grand Serail.

The premier stressed that Lebanon must bolster its ties with Arab countries and overcome various obstacles that have recently arisen.

He revealed that he will hold a series of contacts with Arab figures before embarking on a tour of Gulf states.

Al-Rahi told reporters at the airport that Lebanon's Constitution is clear on its identity.

He lamented that some stances and statements are “killing Lebanon's position at the heart of the Arab League.”

Saudi Arabia announced last week that it stopped all military aid to Lebanon.

The aid halt came after Foreign Minister Jebran Bassil declined to support Saudi resolutions against Iran during two meetings of Arab and Muslim foreign ministers. Bassil is the head of the Free Patriotic Movement, which is one of the strongest allies of the Iran-backed Hizbullah.

I think you and I will be the only ones left;)

Then we can start building the most beautiful place to live. Quality over quantity!!!

Lubnani masihi
You can add me to your list. I also am sure there will be many many more to that list

add us to your list lubnani. We are in Virginia USA but we come to lebanon for holidays in hermel during Christmas.

general Aoun said in his TV interview that he would welcome the saudis in lebanon and protect their homes they purchased in lebanon. So, he is qualified to be president and will care about lebanon relations with the arabic people.