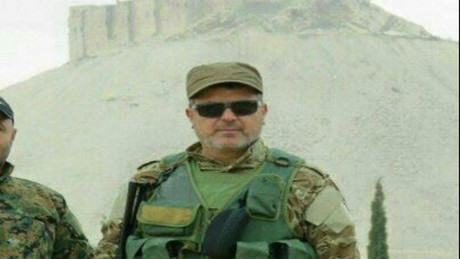 A senior Hizbullah military commander has been killed in battles in the northern Syrian province of Aleppo, media reports said on Friday.

Ali Fayyad, aka “Alaa of Bosnia”, has been killed in the ongoing clashes with Syrian rebels on the Athrayya-Khanasser road in rural Aleppo, the reports said.

Fayyad was known to have “planned, overseen and led” a key part of the siege that is imposed on the rebels in Damascus' Eastern Ghouta region, according to the reports.

He also played a key role in the capture of the strategic Syrian town of Shebaa that lies on the road to the Damascus international airport.

“Fayyad also led a military operation to besiege the Syrian rebel groups and isolate them in the south of the Syrian capital after having pushed them away from the area of the Sayyida Zeinab (Shiite) shrine,” the reports said.

His military tactics also played an important role in “halting the Syrian rebels' advance towards the Syrian coast.”

Hizbullah has deployed at least 6,000 militants to fight alongside Syrian President Bashar Assad's forces against Islamist-led rebels and jihadists and around 1,000 Hizbullah members have been killed in Syria since the start of the conflict.

The party argues that its intervention, which is controversial in Lebanon, was necessary to protect the country from extremist groups and to prevent the fall of Syria into the hands of hostile forces.

How Sad.... Mr. Ali Fayyad aka Alaa of Drugnia was an example of a man who dedicated his life to helping people of all faiths and religions. He died a martyr, a legend, and a hero. He took over 100 bullets in his tender body for the sake of all of us. Another weekend ruined.... Another golf game is no more.... My sorrow is indescribable.

Mr. Ali Fayyad you will always be in our hearts.

No no. he is not a Martyr. Hizbullah shiuld be free from all politics and war. Its ideology should be fair and free from Al Asad of syria. Al Asad is not good man like hitlar. Saddam & Gaddafi gone and Al Assad will gone.Lebanon is not the syria. I liked hizbullah before not now.

Every do got his day! Hizballag has many...more...

I hope this iranian sectarian terrorist did not suffer too much : D

@bin.qassem I see the Iranians on this site sharing Hezbollah's divine failure. Yalla more good news to come, as long as your Sayyed sends your guys to die, we will never run out of such good news

You shouls also learn some history, for example about Croats in Bosnia killed by Hezbollahies.

The Hezbollahies went to Bosnia so the Croats don't come to Lebanon ;)