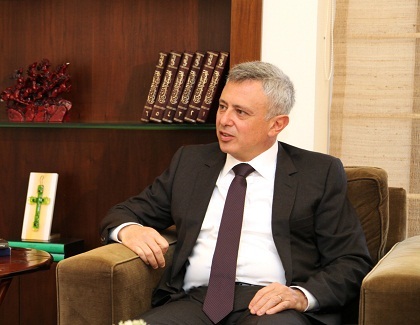 Russian Ambassador to Lebanon Alexander Zasypkin relayed this stance to the lawmaker, revealed a diplomatic source.

Aoun is also a presidential nominee.

Lebanon has been without a president since the term of Michel Suleiman ended in May 2014 without the election of a successor.

Ongoing disputes between the March 8 and 14 camps have thwarted the polls.

Earlier this year, Hizbullah announced that it would boycott electoral sessions unless it has guarantees that its candidate Aoun will be elected president.

Hariri had nominated Franjieh as president in an effort to end the presidential impasse.

Meanwhile, Speaker Nabih Berri has been holding contacts with Hizbullah to persuade it to attend the next electoral session, which is set for March 23.

The Caporal will explode when learning this.

Recent news: he has exploded, shouted and yelled on everyone like never before....
3an Jad mareed ktiir !!!!

Where sorry your American and Saudis have no say