Syria Forces Retake Palmyra in Major Victory over IS 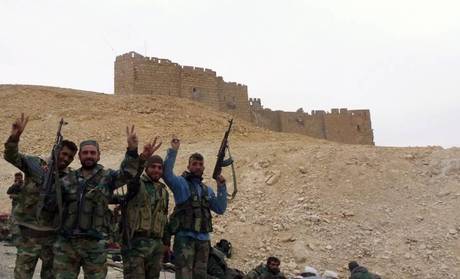 Syrian troops recaptured the ancient city of Palmyra from the Islamic State group on Sunday and pledged to build on the win with an advance against other jihadist strongholds.

President Bashar Assad hailed the victory as an "important achievement and fresh proof of the efficiency of the Syrian army and its allies in fighting terrorism."

The army said pro-government forces had cleared IS fighters from the UNESCO world heritage site, where the jihadists sparked a global outcry with the systematic destruction of treasured monuments.

"Palmyra will be the central base to broaden operations... against Daesh in numerous areas, primarily Deir Ezzor and Raqa," the army said in a statement carried by state media, using an Arabic name for IS.

The northern city of Raqa is IS' main Syrian bastion and the oil-rich eastern province of Deir Ezzor is another key stronghold.

Backed by a barrage of Russian air strikes, Syrian troops and allied militia launched a major offensive to retake the desert city this month.

Palmyra is both a symbolic and strategic prize for Assad's forces, as it provides control of the surrounding desert extending all the way to the Iraqi border.

At least 400 IS fighters were killed in the battle for the city, the Syrian Observatory for Human Rights said. On the government side, 188 troops and militiamen were killed.

"That's the heaviest losses that IS has sustained in a single battle since its creation" in 2013, the director of the Britain-based monitoring group, Rami Abdel Rahman, told AFP.

He said two cars packed with explosives blew up in the afternoon, one west of Palmyra and the other northeast of the city.

A military source told AFP that IS militants had retreated towards the east as the army made its final push.

Syrian state television broadcast footage from inside Palmyra's famed museum, showing jagged pieces of sculptures on the ground and blanketed in dust.

A stone head of one statue lay in the center of one room.

Most artifacts were evacuated by antiquities staff before IS arrived in May 2015, but larger pieces that could not be moved remained in the building.

An AFP journalist inside Palmyra said residential neighborhoods were like ghost towns with no civilians in sight while damage was widespread.

Most buildings bore impacts from artillery shells and gunfire, and some were entirely reduced to rubble.

Army sappers defused roadside mines in both the modern part of the city and in the old ruins.

A group of regime fighters meanwhile took time off to celebrate their win and kicked around a football in the middle of a street strewn with debris.

IS, behind a string of attacks in the West including last week's Brussels bombings, is under growing pressure from Syrian and Iraqi forces determined to retake bastions of its self-proclaimed "caliphate."

On Thursday, the Iraqi army announced the launch of an offensive to eventually recapture second city Mosul, held by the jihadists since June 2014.

IS overran the Palmyra ruins and adjacent modern city in May 2015 and blew up two of the site's treasured temples, its triumphal arch and a dozen tower tombs, in a campaign of destruction that UNESCO described as a war crime.

- Boost to 'confidence and morale' -

Russian forces, which intervened in support of longtime ally Assad last September, were heavily involved in the Palmyra offensive despite a major drawdown last week.

IS and its jihadist rival, the al-Qaida-affiliated al-Nusra Front, are not party to a landmark ceasefire in Syria since February 27.

The month-long truce has brought relative quiet to many areas across Syria, where more than 270,000 have been killed and millions had fled their homes in the last five years.

The truce took effect before the resumption in mid-March of U.N.-brokered indirect peace talks between the Syrian government and the opposition.

In his Easter message on Sunday, Pope Francis voiced hope that the talks that are due to resume in April will help end Syria's war.

"Good will and the cooperation of all will bear fruit in peace and initiate the building of a fraternal society," he said.

Palmyra, northeast of Damascus, drew some 150,000 tourists a year before it became engulfed by Syria's civil war and is known to Syrians as the "Pearl of the Desert".

All warmongers have evil soul. They end up in Hell.

You impersonate hatred, violence and wars. You certainly like and appreciate yourself enormously.

You must apply this to all kind of terrorists.

No civilised person should see this as a negative thing! The crazy, murdering fanatics that destroyed the ancient unesco heritage site, that is a rare example of 4 thousand years of history, and used the site as a public execution venue (including the beheading of the 82 year old historian who devoted his life to this UNESCO site, and refused to evacuate when ISIS was invading) should be celebrated on their defeat! I honestly struggle to understand some of the defenders of ISIS on this site. They claim not to support ISIS but always find ways to defend them and disparage their defeat!

A good thing this is! No other way to look at it!

Where did you see anybody defending ISIS? But what I struggle with is people like you who defend an equally brutal and murderous regime and a sectarian criminal militia like hezbollah. But thanks for your unbiased opinion.