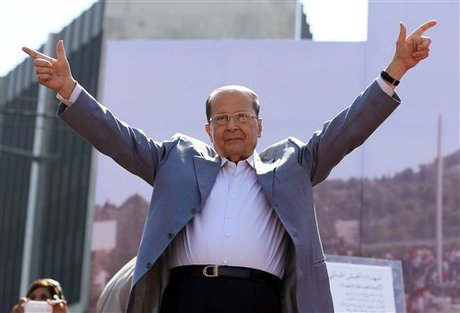 The officials, who were not identified, are exerting efforts to persuade Hizbullah to drop its support for Free Patriotic Movement chief lawmaker Michel Aoun, it said.

According to the officials, Franjieh has better chances to be elected as head of state after he received the backing of al-Mustaqbal Movement chief ex-PM Saad Hariri.

Hariri announced his backing for Franjieh late last year. His announcement was followed by a rapprochement between Lebanese Forces chief Samir Geagea and Aoun.

Geagea withdrew from the presidential race saying he backed Aoun instead.

Hizbullah is beginning to realize that its efforts to bring its top ally to Baabda Palace are facing obstacles, said al-Seyassah.

But it has not yet reached a decision to end its support for Aoun, the newspaper added.

Geagea made a Historical mistake because he doesn't know who the Caporal really is. This Riachi guy is an ill advisor.

spot on... he lost a lot of respect as a result.

He did it for selfish and personal reasons... He must have had assurances he will be president next time round.

Hezbollah will stay with Aoun till he dies. Reason is that they are dependent on the christian fig leaf that he provides them with. Imagine the fury from Aoun if Hezbollah turned its (so called) support away from him. He would turn the tables on them leaving them virtually without any christian support whatsoever.

No, because Aoun is the sole candidate for the Resistance, and he will remain so until you people accept him or don't and we will remain in vaccum.

Why should we "accept" what Hezbollah want? Democratically speaking, they are only 11 votes.

how about your credibility mowaten, how do you rate it? despicable!

"the Kuwaiti al-Seyassah newspaper reported" Nuff said. Of course March 8 officials would reveal sensitive information to a KUWAITI newspaper? Only Naharnet trolls would fall for this propaganda.

but when As Safir or Al Akhbar reports about Nusra or ISIS it is believable!