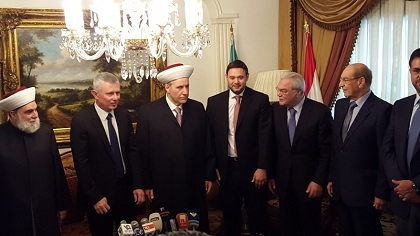 Head of the Marada Movement MP Suleiman Franjieh emphasized Lebanon's role in the Arab world, while highlighting its Arab identity and rejecting attempts to eliminate it, reported al-Mustaqbal daily on Sunday.

He made his remarks during his visit to the northern city of Tripoli on Saturday, of which he said: “I feel at home here.”

He paid a visit to Mufti of the Northa nd Akkar Sheikh Malek al-Shaar, who threw a banquet in his honor.

“It is normal for me to be among my people in Tripoli as distance is foreign to us,” continued Franjieh.

Furthermore, he ensured to raise Lebanon's “Arab voice at a time when the nation is coming under the deceitful campaigns aimed at tarnishing its image.”

“Arabism is our history and we are all Arab.”