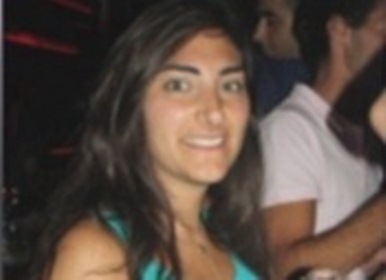 Lebanese woman Myriam al-Ashqar, 28, was found dead and soaked in blood Tuesday in a forestland located between the Keserwan towns of Sahel Alma and Harisa, LBC television reported.

It later appeared that she was killed by the janitor of the Our Lady of the Annunciation monastery in Baqloush, where she went to pray on Monday and where she used to pray several times every other week, LBC said.

The janitor killed her after she managed to prevent him from raping her, the TV network added.

When Myriam did not return home that day, the search started in Sahel Alma’s forestlands, with the participation of army troops, security forces and the town’s residents, according to LBC.

The search operation continued until Tuesday morning, when parts of her clothes were found blood-soaked and buried in the ground near the janitor’s room, prompting the search crews to intensify their efforts before discovering Myriam’s body wrapped in a white bag in a hard-to-reach place.

Army troops from the airborne regiment then rappelled down the valley and pulled the body.

Security forces arrested the prime suspect in the crime, the Syrian janitor Fathi Jabr al-Salatin, who is well-known in the town, where he had been residing over the last year and a half.

Information obtained by LBC said “the perpetrator tried to rape Myriam to no avail, before hitting her on the head with a sharp object and finally slaughtering her.”

“He then put her in a sackcloth bag, tied the bag and threw it down the cliff,” LBC added.

The janitor reportedly confessed to committing the crime and DNA tests are underway to confirm that, LBC said.

May God have mercy on your soul and may your memory be eternal. May God grant your family and loved ones patience and steadfastness as now you are praying for them and all who love "His appearing".

RIP, Justice will be served.

These filthy Syrians have never seen a lady in their life, they are so obsessed!!! How can we have them as neighbors? We shouldn't generalise by we have the worst Syrians in Lebanon! Let them go back to Assad their boss, we don't want them in Lebanon. This retarded lunatic should be hanged.

RIP Myriam. I am sure justice will prevail

I shall pray for her soul, for her father, mother, and all her family for their pain, and terrible sufferings.

Mansour, if you believe what you write, you are a psycho and you need immediate help.

Absolutely sick society! Did she know when she woke up in the morning that she would die and at the monestary of all places...wow what a sick sick bastard. May she rest in piece. Live today as if it was your last.

@Mansour
when a Lebanese murders someone do you feel you are a murderor?

Adminstrative arrangements have to take place at the border to prevent criminal Syrians from entering the country regardless of the situation there. Some sort of Visas systems with stringent conditions have to be implemented. The number of crimes committed by Syrians on lebanese soil is staggering. It keeps getting worse. Let a law be designed to impose a background check using the local mayors or officials in Syria before granting employement to any Syrian. It could be called Miriam Ashkar Law in her honor. May she rest in Peace. I cannot imagine how hard it is on her family. What a lovely young lady!!

geha go and jump off a bridge for me and die!

Thanks to Hariri's Al Qaeda - Akkar and Tripoli Brigades for supporting the crazy Sunnis regardless of where they come from, and lately, from Syria, the land of their all-time masters.

may god forgive him because he doesn't know what he's doing....

This is a tragic accident that has nothing to do with politics. May God give her parents and relatives and friends the strength to carry on.

RIP Miryam. God help your parents and family
The other thing is Why do we have a Syrian guard in a Lebanese church. I'm not being racist but I'm sure there are plenty of Lebanese men who are capable of doing the same job.
I hope he rots in jail and then in hell
There was a very similar incindent in the north of Lebanon a year or so ago where the Syrian guard killed a Lebanese farmer in the monastery of St Jacob
Can't be trusted

@mansour
this story is not about politics.
this is a personal time for support to the parents of this young woman.
do not use a personal crime to justify your hatred, and do not accuse people stupidly.

now regarding jumping of a bridge: please note that I am not suicidal, and if you are, so please go ahead and do it :)
I am not a follower of anyone, thus I will not jump from a bridge :)

Disgusted, outraged, revolted against that hideous murder of Myriam Achkar r.i.p.; Those Maronite clergy men have been given the land of our ancestors as free donation from hard working farmers seeking to enter the kingdom of God. And those Maronite clergy men improperly controlled these lands; allowing non-Maronites to foster homes on them (the Lassa case) and handing the keepers keys with non-Lebanese to watch over them. Give the immense lands you own to Maronites migrating from the country, without a penny ya clergy men, better for them to build a house than not being able to afford purchasing one. The country is emptying as you care only about your church fortunes. Who controls the land, controls the country. Resign RAii now! We respect the Maronite archbishop as a rank, each individual that takes the position is to be criticized as to his actions as person…

may this poor victim rest in peace. may God help her family.

The monastery should be held responsible for not doing proper background checks, screening and due diligence before and after hiring the janitor in charge of the monastery.

The interior minister should resign immediately , obviously he is not in control .he is not up to his job.

i love how my post get deleted!as ive statedabout those Syrian dogs may that man who killed this innocent child of GOD may he ee in his life time the rape,murder and misery of his family and the whole of Syria.May this choas in Syria turn into a civil war that the world has not seen in a thousand years.Praise be To God For the millions about to Die in Syria.Thank you

Geha i do Pray for this poor girls soul but what i will never do is feel anything for those Syrians and the dogs of all dogs the people i hope never see a country of there own grubs of grubs Palestinians.

Am Syrian and I feel sick of what this man has done... May her soul rest in peace and I hope they excute him as soon as possible