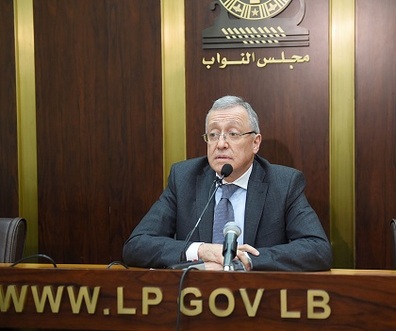 Al-Mustaqbal bloc MP Ahmed Fatfat on Friday confirmed reports that al-Mustaqbal Movement led by ex-PM Saad Hariri intends to hold a general conference for internal reevaluation in the wake of the latest political and electoral setbacks.

“There are preparations to hold an emergency general conference for al-Mustaqbal movement, which in principle will be held between September and October,” Fatfat said in an interview with the Akhbar al-Yawm news agency.

“In his speech yesterday, ex-PM Saad Hariri rearranged the priorities,” the lawmaker added.

“The coming period requires a common reevaluation by all the members of al-Mustaqbal movement in order to take the necessary decisions at the organizational, administrative and political levels,” Fatfat noted, revealing that “the first step will be the reaffirmation of the principles.”

On Thursday, Hariri pledged to conduct a “critical internal reevaluation” in al-Mustaqbal in light of the results of last month's municipal polls.

“I will not pin the responsibility on anyone and I will not absolve myself and those with me of the responsibility. I'm in charge of drawing lessons from the polls' outcome, I'm at the top of al-Mustaqbal movement's political hierarchy, and I will digest the results no matter how hard they may be,” Hariri said.

Apparently referring to Mustaqbal minister-turned-electoral rival Ashraf Rifi, who has been accused of using a sectarian rhetoric to win Tripoli's municipal vote, Hariri added: “Politics in Lebanon has tried to give me lessons in lying, maneuvering, incitement and the manipulation of people's sentiments, but my upbringing taught me to be honest, frank and loyal, even if that comes at my expense.”

Rifi had confirmed last week that he would form a coalition with “forces seeking change” in any upcoming parliamentary elections in the northern city of Tripoli.

His remarks came after a list he backed achieved a stunning victory in the city's municipal polls against a list backed by Hariri, ex-PM Najib Miqati, former ministers Mohammed Safadi and Faisal Karami, Jamaa Islamiya, al-Ahbash and the Arab Democratic Party.

Rifi also announced last week that he was mulling the idea of starting a political movement.

Addressing al-Mustaqbal, the minister called for “rectifying the course and endorsing policies that take the opinion of the Sunni community into consideration in order to avoid its descent towards extremism.”

@ terrorist and ex-fpm you guys are true patriotic... I don't write much on Naharnet, becasue they don't think I am at their standard, so they remove my comments every time, but I have been reading your posts, and Lebanon needs people like you...
I am chritian maronite... In my opinion, Rifi is most honorable, clean politician Lebanon had for years.
Bashir is my idol, and he will always be. I feel Rifi is a true patriotic who will not succumb to any pressure.. Sadly, I feel they will eliminate him soon, as they did with other honest politicians...
Christians had a true casue fighting the Palestinians in the 70s as they tried to take over the government.. I fought with the LFs. Now Palestinians stopped their control over the Lebanese government, but now Tehran took over, thanks to Nasrallah... It is pathetic...
It is time we have politicians like Rifi to say to Hezbollah no you can't have your way, becasue your way is not in the interest of the Lebanese people.

I second every word of my dear friend Terro. He is the voice of truth and patriotism.

A distinguishing fact is that M14 supporters are the first to criticize their representatives or leaders when they deviate from the path of democracy and consistency.

Hariri nominates Franjieh and Geagea nominates Aoun, and still no president. Both need to look hard at their blunders and get back to their original positions of refusing any one from M8. Compromising with Hezbollah yields only to more compromising. I thought grown ups like Hariri and Geagea should have learnt this by now.