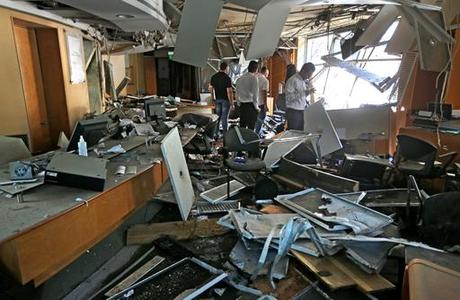 The investigation into the bombing that rocked the headquarters of BLOM Bank in Verdun has “made progress,” media reports said Wednesday, as MTV reported that one of the two suspects who were arrested shortly before the blast was carrying “a walkie-talkie of the type used by the Resistance Brigades.”

“The officers of the Internal Security Forces Intelligence Branch have managed to reach a serious thread in the investigations which might lead to unveiling the identities of those who carried out the bombing that targeted BLOM Bank,” al-Akhbar newspaper quoted security sources as saying.

“The probe made progress yesterday and investigators are focusing on the hypothesis that two cars -- a BMW and a Kia -- transported the culprits to the blast site,” the sources added.

“The BMW's driver monitored the area as an unidentified man stepped out of the Kia to plant the bomb at the bottom of a tree that is adjacent to the bank,” the sources said, noting that “the aforementioned tree and the low quality of the CCTV footage prevented the recognition of his facial features.”

The sources also confirmed that two suspects have been arrested in connection with the case and that they passed in the area on a motorcycle shortly before the blast.

“They were not carrying identification papers and when an ISF patrol arrested them it turned out that one of them was carrying a gun while the other was wanted by the judiciary,” the security sources said, adding that the two were referred to the Intelligence Branch after the blast to determine whether they had links to it.

MTV had overnight reported that the two detainees are “Lebanese citizens who hail from the South.”

“They were carrying a gun and a walkie-talkie of the type used by the Resistance Brigades and it turned out that one of them is a fugitive,” the TV network added.

The Resistance Brigades is a Hizbullah-affiliated paramilitary group.

The explosion on Sunday evening blew out the entire glass facade of the headquarters of BLOM BANK, one of the country's largest, but only one person was lightly wounded.

Politicians and local media have linked the attack to a law voted in December by the U.S. Congress to impose sanctions on banks that deal with Hizbullah, considered a "terrorist group" by the U.S.

Last month, Lebanon's Central Bank instructed the country's banks and financial institutions to comply with the new measure against the Lebanese Iran-backed group.

Interior Minister Nouhad al-Mashnouq said the blast was caused by a bomb containing about 3-4 kilos of explosives.

Washington has labeled Hizbullah a global terrorist group since 1995, accusing it of a long list of attacks including the bombing of the U.S. Embassy and Marine barracks in Lebanon in 1983.

BLOM Bank director general Saad al-Azhari told reporters that no threats had been received by the bank ahead of Sunday's blast.

MTV had overnight reported that the two detainees are “Lebanese citizens who hail from the South.”

“They were carrying a gun and a walkie-talkie of the type used by the Resistance Brigades and it turned out that one of them is a fugitive,” the TV network added.

The Resistance Brigades is a Hizbullah-affiliated paramilitary group.

could it be the resistance is now infiltrated by israelis and takfiris?

Resistance Brigades or another terror group owned by hezbollah and Iran.

Resistance? Which Resistance? The one that has destroyed the living together????

20 minutes ago VDL (93.3): RPGs are being used in clashes between the families of Berro and al-Diqa in the Bekaa town of Hezzine.