National Dialogue Session to be 'Decisive' on Electoral Law 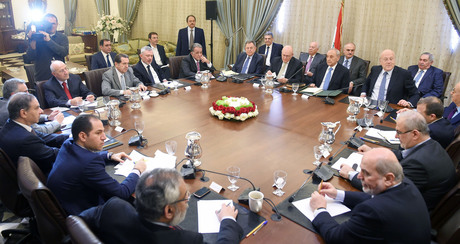 The June 21 national dialogue session will be “decisive” regarding the issue of the new electoral law, a media report said on Thursday.

“The issue has been put on the front burner and it is being addressed with same attention that is being given to the election of a new president,” al-Liwaa newspaper quoted informed parliamentary sources as saying.

“The national dialogue session that will be held on Tuesday, June 21 will be decisive in this regard and the parliamentary blocs are preparing to submit their suggestions on the new electoral law to Speaker Nabih Berri,” the sources said.

“The new law will take into consideration the outcome of the municipal polls and the interests of all parties regarding their representation, which means that it will involve proportional representation,” the sources added.

Berri had on Wednesday stressed the need to reach a new electoral law, hoping the dialogue session will “approach this issue in a positive manner.”

Rejecting the 1960 electoral law, under which the last parliamentary elections were held in 2009, Berri noted that “proportional representation is the best system for everyone.”