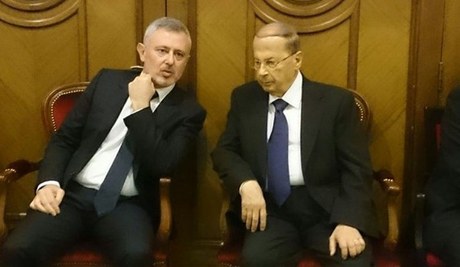 The latest drive in the talks over the presidential crisis “has reached its peak, ahead of an expected meeting between Berri and General Michel Aoun and another between Sayyed Hassan Nasrallah and MP Suleiman Franjieh,” An Nahar newspaper reported.

The Saudi side stressed, according to the agency, that “the kingdom does not have a candidate and that it does not also have a veto on any nominee.”

“It backs any agreement among the Lebanese but it also fears that Lebanon could further come under Iran's hegemony,” the agency added.

Ministerial sources have however noted that “the regional atmosphere is not currently befitting for such settlements, unless we start believing that Lebanon can elect its president without Saudi and Iranian influence.”

The reports come in the wake of a series of meetings that were held last week, the last of which was between Hariri and Saudi King Salman bin Abdul Aziz in Jeddah on Saturday.

Lebanon has been without a president since the term of Michel Suleiman ended in May 2014 and Hizbullah, the FPM and some of their allies have been boycotting the electoral sessions at parliament, stripping them of the needed quorum.

Hariri's move was followed by Geagea's endorsement of his long-time Christian foe Aoun for the presidency after a rapprochement deal was reached between their two parties.

Caporal is liar, corrupt, mentally ill and traitor.
Sleiman is only traitor.

Micel Aoun is a lot of things to a lot of people. I have the utmost respect for Michel Aoun who came from a poor family and through his intelligence and hard work rose to be chief of army. I recommend people to read this:
https://www.meforum.org/meib/articles/0101_ld1.htm