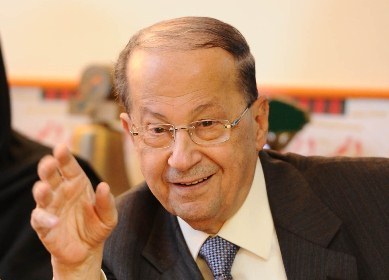 Mustaqbal bloc MPs have noted that Free Patriotic Movement founder MP Michel Aoun can only “dream” of being elected president, although FPM officials are saying that the presidential chances of the Change and Reform bloc chief are surging.

“At the personal level, we do not have a problem with Aoun, but it is out of the question to endorse him for the presidency for reasons related to his political course,” Fatfat added.

“When he rose to power in 1989 and 1990 we witnessed the Elimination War and the Liberation War,” the lawmaker reminded.

Turning to Aoun's political conduct in the period that followed his return to Lebanon in 2005, Fatfat slammed the performance of FPM's ministers, saying they “behaved maliciously and incompetently” and that they “failed to improve the energy and telecom sectors.”

The MP also cited “all of Aoun's declared political affiliations and his extreme adherence to the Iranian policies and Hizbullah.”

Change and Reform bloc MP Nabil Nicola however told al-Joumhouria that “day after day, it is becoming clearer that the only person who can rally all people is General Aoun.”

Asked about the visits that Aoun paid Wednesday to Speaker Nabih Berri and Grand Mufti Sheikh Abdul Latif Daryan, Nicola described them as Eid al-Fitr protocol visits but noted that “the General's chances are surging regardless of all these visits.”

Change and Reform parliamentary sources meanwhile told al-Liwaa that “the latest domestic moves bring the presidential seat closer to General Aoun although nothing is final yet.”

“Further deliberations are needed,” the sources added, noting that Aoun will continue his political contacts.

The sources also noted that “no meeting has been scheduled between him and (Mustaqbal leader) ex-PM (Saad) Hariri, although some parties are seeking to create communication between them.”

He is a born loser.

unfortunately you are right.

He is a joke. He preaches democracy but asks for the appointment of the president.

@terrorist.... your use of the word "veto" is incorrect. Not voting for a certain candidate is not considered a veto but an absolute right in democracy. Veto is when you obstruct and paralyze a nation for the sake of one person and that is what Aoun, Hezbollah and company are doing.

The argument that Aoun should be the sole legitimate candidate for president and that everyone should vote for him because he and Geagea supposedly represent 80% of Christians fell apart or more accurately was thrown out the window by Aoun and allies around the beginning of January 2011. That's when hassin appointed Najib Mikati PM after Omar Karame failed his job interview for the position and Hariri, the overwhelming representative of the Sunnis, was blacklisted by hassin who holds no official capacity other that the one bestowed upon him by the Ayatollahs. But appointing Mikati was only the first step, hassin still need the required votes to make it legitimate. The votes of his minions in Parliament Berri, Aoun, Frangieh, Arslan, Hardan were not enough and Jumblat had already come out in support of Hariri who looked to be on the way to the Serail. hassin had to act fast. He sprung into action ordering his thugs in black shirt to deploy all over the capital and suburbs.

The Lebanese president postponed the consultations a few days as a result. Meanwhile masked armed thugs apeared on the outskirts of Choueifat. Jumblat fearing another May 7 buckled and changed him vote. Mikati, hassin's hand picked candidate, was nominated for the top Sunni post ahead of Hariri the overwhelming representative of the Sunnis. A smug Aoun issued a one way ticket to the ex-PM. If Aoun wants to book a ticket to Baabda he should simply ask hassin, who nominated him and claims to support his presidency, to deploy his black shirted thugs so he can garner enough votes to be elected. After all what was good for Mikati should be good for Aoun. Why wouldn't hassin grant Aoun this one wish, the man is dying to be president. It's clear who is blocking and obstructing the Presidential vote! Enough is enough. As soon as hassin does for Aoun what he did for Mikati, the presidential crisis would be over!!

They have very short memories.

why isn't Hariri prime minister? Does he not represent the vast majority of Sunnis?