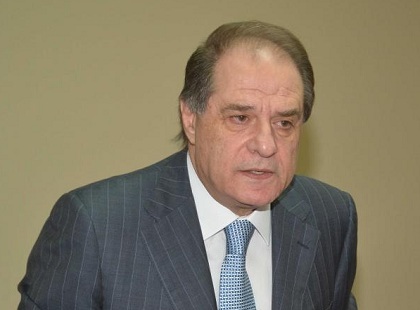 Labor Minister Sejaan Qazzi on Monday warned Sweden of tit-for-tat action if it deports dozens of Lebanese families as part of its reported decision to ask tens of thousands of foreigners to leave the country.

“Qazzi sent a letter to Swedish Ambassador to Lebanon Peter Semneby, asking for clarifications regarding the deportation of a number of Lebanese who are working in Sweden,” state-run National News Agency reported.

“If this expulsion is unjustified legally and security-wise, the Lebanese Labor Ministry will take similar measures against Swedes working in Lebanon, regardless of their professions and status,” NNA quoted Qazzi as saying in the letter.

“The Labor Ministry rejects that Lebanese citizens be treated in this manner abroad, as if they have no defender or a State that protects them,” the minister stressed.

In this regard, Qazzi has asked the ministry's relevant departments to provide him with a list of the names of the Swedish citizens who work in Lebanon.

“We will take this measure against any state that does not respect Lebanese employees, unless their presence violates the law or poses a security threat to the host country,” the minister pledged.

Swedish authorities had recently stripped over 75 Lebanese families of medical and social aid cards that had been granted to them by the Swedish state, media reports said. The Lebanese families had traveled to Sweden in the wake of the 2006 war.

According to An Nahar newspaper, the decision has no political motives seeing as the families hail from several Lebanese regions and their religious affiliations are diverse.

Quoting Lebanese diplomatic sources, the newspaper said that the expulsion decision is not limited to Lebanese citizens but is rather part of a judicial decision to deport around 65,000 foreign expats from the country.

Another arrogant "I love myself" Lebanese minister. These families in Sweden are refugees who were allowed entry because of the Lebanese civil war. The reason for their asylum is no longer valid.

He threatens to expel Swedish citizens from Lebanon? Does the ignorant minister know of any Swedish nationals seeking asylum in Lebanon and draining the Lebanese welfare system?

Well southern i was used to smarter comments coming from u..
This minister's statement is a perfect exemple of populist statement, sweeden will expell asylum seeker who where refused asylum not legal lebanese family working there nor lebanese with swedish nationality as somme retards on this site may have said...
Given to the incompetency of our "politician" lebanese ran away with syrian asylum seeker to find a better place (remember the boats from tripoli?? For exemple)
Those are illigal asylum seeker given that lebanon is not in a state of war and that pther refugies are more entitled to the limited resources of the swedish social security...
So before saying bullshit, and cheering for stupid statements of our dear politicians read a litle more my friend...
By the way i wonder how much illigal swedish or finland origin asylum seeker we have in lebanon :)
This said have a good day all of u guys

so according to you, Sweden is trying to deport its own nationals?

None with 20 years in Sweden and swedish nationality will be repatriated. Its only fair and natural that those who came because of war returns when circumstances permits withing a reasonable time frame.

imagine_nnn
once i thought that you are a bit more intelligent than now you appear now, but shame it's not... my statement is an answer to a silly statement to one of your kind,full stop.

Well u started it by : u donnot sound lebanese..
so i figured u were appeoving this minister statement..
Please correct me :)

And Apparently "my kind" is wrong, eventhough i donnot care for race or religion but i believe there is a human kind...but please can u tell explain more about "kinds" please?...
Really man, get ur head out of ur arse, stop watching manar/sana for a while, take some vacation, weither is nice man, and please, please we might cheer for opposit sides in this conflict but keep away from nonsence statement like the one of this stupid "minister"....

Tex i most of the time approve ur coments and i thank u for ur thoughts on my way of thinking but i think southern is not to be confused with the other illuminated guys, he is not a religious fanatic following "the party of god" but a leftist (i might be wrong) putting the fight against imperialism above all other, in my point of view iran is not an imperialist state than usa/uk.... Syrian regime usedkfiri in lebanon before, march 8 allied with al tawhid in tripoli hachem minkara tried to institute charia there during the war executing leftists and christians and have not changed ideology as i recall.. Hezbollah assassinated leftists during the war to assert domination over southlebanon, iranian revolutionary gard executed thousand of leftists, free thinker,opponents of all sects and political views after the revolution against the shah and turn iranian state to the retarded fanatic state we know now..

There should be dialogue tex, southern and many other should be debated with with honesty, after all must try to find a way to live together, and there should be room for comon ground...
This said i hope the syrian population who lived under this tirany for decade(we only get a taste of it in lebanon not so long ago) i hope them freedome whatever takfiri/zionist/imperialist other may call me

Iran is not less an imperialist state than...
But i'm sure u got it :)

As for ur second coment some leftists does consider the fight against "imperialism" above all.... Have u ever heard: "la sawt ya3al fawk sawt al maarakah?" :) this is a static way of thinking a way that led big leftist partys around the world die slowely...
This said some found logical explanation of a hezbollah fighter killing samer hana a lebanese officer on a lebanese hellicopter while on duty, so yes some donnot even believe in lebanon....

Iaam helps hezbollah southern not the resostance not the state not even shia, they even fought berri..
Iran helps this sectarian millicia and anyone who side with its interests..
Lebanese reistance from israel started even hezbo qas created, beirut was liberated even the official creation of hezbollah, hezbollah fought beri until 89 (aklim el touffah for exemple) and was too busy for resisting... Hezbollah elliminated any opponent in the south intelectuel politicians army especially leftists, even after the war hezbos tried to take ober the resistance by creating reaistance brigades all refused to join even ssnp comunist resistants were executed on their way to the frontlines
What resistance are u talking about?????
I'm sorry i was probably wrong u are another fanatic hebos probably a chegevara tshirt...

Iaam helps hezbollah southern not the resostance not the state not even shia, they even fought berri..
Iran helps this sectarian millicia and anyone who side with its interests..
Lebanese reistance from israel started even hezbo qas created, beirut was liberated even the official creation of hezbollah, hezbollah fought beri until 89 (aklim el touffah for exemple) and was too busy for resisting... Hezbollah elliminated any opponent in the south intelectuel politicians army especially leftists, even after the war hezbos tried to take ober the resistance by creating reaistance brigades all refused to join even ssnp comunist resistants were executed on their way to the frontlines
What resistance are u talking about?????
I'm sorry i was probably wrong u are another fanatic hebos probably a chegevara tshirt...

7alabi ur coment, as retarded as it may sound made me smile :)
Thank you

It's the states duty to protect its citizens, something that we Lebanese are not used or accustomed to. Mr Qazzi says that if their deportation is unfair, we stand by our citizens. But I don't think that his warning is against action towards those who are staying in Sweden beyond their legal time limits.