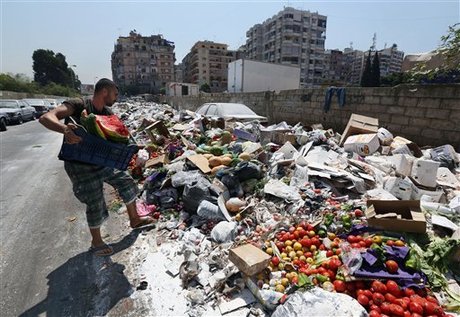 Protesters blocked on Tuesday the entrance to the Bourj Hammoud landfill to prevent dump trucks from entering the site, the National News Agency said on Tuesday.

Several youth blocked the road near the landfill in protest, said NNA.

Security forces deployed in the area and tried to convince them in vain to open the road.

Last week, Kataeb party students forced the work to a halt at the landfill after a scuffle with the security forces. They demanded the halt to what they alleged “the project of land-filling the sea with garbage on Metn's coast.”

The government's handling of the waste management file was one of the reasons that Kataeb cited when it asked its ministers to resign from Prime Minister Tammam Salam's cabinet earlier this year.

Kataeb Party chief MP Sami Gemayel has accused the government of taking a decision to “fill the Mediterranean Sea with garbage without conducting an environmental impact study and without sorting or treating the waste.”

Lebanon's unprecedented trash management crisis erupted in July 2015 after the closure of the central Naameh landfill which was receiving the waste of Beirut and Mount Lebanon.

The months-long crisis, which sparked protests against the entire political class, saw streets, forests and riverbanks overflowing with waste and the air filled with the smell of rotting and burning garbage.

The cabinet eventually decided to establish two landfills in Costa Brava and Bourj Hammoud and to reactivate the Naameh landfill for two months as part of a four-year plan despite the rejection of many residents and civil society activists.

A landfill’s location in the Chouf and Aley areas would be determined later following consultations with the local municipalities, the cabinet said at the time.

Lebanon will be accused of becoming the greatest polluter of the Mediterranean sea!!!

Lebanon is already on the top world list of pollution and corruption. Shame on our politicians.

Notice all everyone does in Lebanon is block and whine YET never confront the problem directly?