Who is the U.S.-Designated 'Terrorist' Leading IS in Somalia? 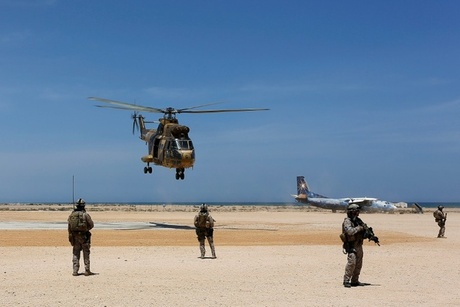 A middle-aged Somali-born cleric with a bright orange beard was this week put on a U.S. terror list, accused of heading the Islamic State group in East Africa.

The U.S. State Department on Wednesday said Abdulqadir (also Abdiqadir) Mumin is "the head of a group of ISIL-linked individuals in East Africa," using another term for IS, and branding him a "global terrorist".

Here's what we know about the man, and the threat he poses.

- British links -Mumin was born in the semi-autonomous Somali region of Puntland and lived in Sweden before moving to the UK in the 2000s, where he was granted British citizenship.

In London and Leicester, he developed a reputation as a firebrand preacher at extremist mosques and in videos posted online.

Monitored by MI5, Britain's domestic intelligence agency, Mumin is thought to have known Mohamed Emwazi, the IS executioner nicknamed 'Jihadi John', and Michael Adebolajo, one of two people convicted over the 2013 murder of British soldier Lee Rigby in London.

In 2010, Mumin travelled to Somalia to join the Shabaab, the Al-Qaeda-aligned militant group -- which both Emwazi and Adebolajo had tried to do, but were unsuccessful.

On arrival, he reportedly burned his British passport then served as a Shabaab propagandist and imam -- "an ideologue not a commander," according to Matt Bryden, director of Sahan Research, a Kenya-based think tank.

- Defection to IS -Mumin was dispatched to mountainous eastern Somaliland on the border with his home region of Puntland in 2012 to bolster the fervour of fighters under the command of local Shabaab leader and Warsengili clan militia leader Mohamed Said Atom.

Atom surrendered to the Somali government in 2014 and Mumin eventually took control of the Puntland faction which, separated from the bulk of the Shabaab in Somalia's south, has always been an orphan group.

Largely abandoned in the inhospitable Golis mountains, Mumin reimagined himself as a commander, despite lacking any experience on the battlefield, and announced his defection to IS, along with a handful of fighters, in an audio message last October.

In the following months, his small group of fighters was harried and attacked by the Shabaab loyalists with local Puntland media describing him as being "on the run".

In a briefing note, the International Crisis Group think tank suggested his departure may have been "a pre-emptive attempt... to lay claim to the spiritual leadership of a future IS franchise in Somalia."

The switch to IS has not won him much support -- neither in manpower, money nor material -- with most observers believing he has between 20 and 100 followers, predominately from his own Majerteen clan.

Washington said Mumin has "expanded his cell of ISIL supporters by kidnapping young boys aged 10-15, indoctrinating them, and forcing them to take up militant activity."

Even so, as a bid to take over Shabaab territory, Mumin's gambit appears to have failed dismally.

A video released in April showed Mumin at a small training camp with a handful of supporters in headscarves and grey tunics carrying a variety of assault rifles, grenade launchers and machine guns.

- Expansion prospects 'limited' -The remoteness of the Golis mountains has so far saved Mumin from the fate of other defectors who were hunted down and killed, or chased into exile, by the Amniyat, the Shabaab's intelligence unit that has crushed IS attempts to take control of the East Africa jihad.

In an article published this week by the Washington-based Hudson Institute think tank, researchers Daveed Gartenstein-Ross and Nathaniel Barr described IS as having "only a small and tenuous foothold in Somalia" under Mumin's leadership.

Arguably, Mumin's biggest successes is his designation by the U.S. as a serious terrorist threat -- making him the potential target of a drone strike.

Despite his less-than-impressive performance, analysts say it would be wrong to dismiss his nascent group.

"Its prospects for expansion are limited," said Bryden. "But there is potential."