Bkirki Welcomes Election of Aoun: Patriarch Would be Pleased 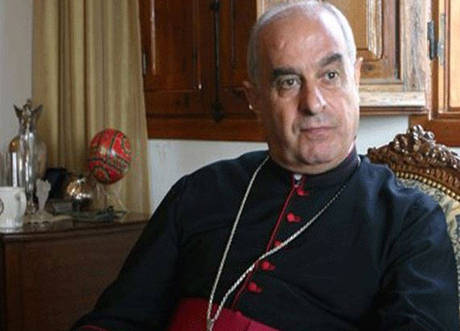 Patriarch al-Rahi's envoy Bishop Boulos Sayyah said it is normal for Bkirki to elect MP Michel Aoun for the presidency because he has the support of the majority of Christians, as he stressed that Patriarch Beshara al-Rahi would be pleased if founder of the Free Patriotic Movemnet, Aoun, wins the polls, al-Joumhouria daily reported on Wednesday.

“The latest political developments at the presidential level are promising after (ex-PM Saad) Hariri gave momentum to the file. Patriarch al-Rahi rejoices for the election of Aoun and he has echoed that several times,” said Sayyah.

“We support the election of Aoun but that does not mean that we prefer a certain candidate over another,” he added in reference to Marada Movement chief MP Suleiman Franjieh.

Sayyah stressed that “Bkirki will support the president who will be elected. It is normal that Aoun becomes a president because he has the support of the majority of Christians, now that the Lebanese Forces back him too.”

He pointed out that the Kataeb party “will not oppose Aoun, and Franjieh was also part of the Change and Reform bloc (of Aoun) and therefore there is no substantial disagreement between the Christians.”

“Electing a head of state facilitates agreement on other matters including an election law,” he went on to say.

Dear Batrak: what about the caporal people daily insults against Bkirki?
Just have a look on the blog of the dirty Wadih A. whose insults have the blessings of the Caporal...