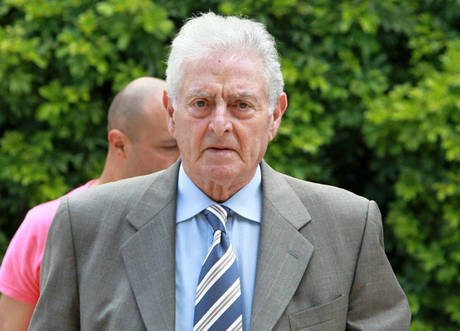 Member of Parliament Dory Chamoun, alluded to the founder of the Free Patriotic Movement MP Michel Aoun without naming him and said that old people are usually requested to submit a health record when they wish to sell a piece of property or apply to governmental positions, let alone if they apply to the post of presidency.

“If somebody wants to sell a piece of property and he is above 80 years of age, he is usually requested to submit a medical certificate stating qualification of carrying out such an operation, let alone if he is a candidate for the presidency,” said Chamoun in a statement he made after a parliament session to elect a president that failed to achieve quorum.

“When my father-- late President of Lebanon Camille Chamoun-- was a president, he used to work for more than 14 hours a day. Today the candidate for the presidency must prove eligibility to work for 10 hours consecutively,” added Chamoun.

His remarks triggered dismay of an OTV station reporter, affiliated to Aoun, she replied: “Don't you think the same applies to you. Shame. This is not politics, this is a personal remark.”

Aoun, aged 81, has lately passed the leadership of the Free Patriotic Movement to his son-in-law Jebran Bassil.

Aoun stopped making public appearances months ago and reports have said that he prefers to maintain silence until the political parties agree on his election for the presidential post.

This is fact and real life question. The alternative is obviously capable to work 10hrs but incapable to run a country. We need new blood and new names.

What we need is a president with strong values and a moral compass, not an olympic athlete.

"We know that mr Aoun had mental issues which required long stays at mental institutions."
Who is "We"? You and your imaginary friends?

from his statement we can easily appreciate Dory's mental deterioration... thus his criticism is nonsense.

Wow, you're a Mystic AND a Psychic.. also as you keep demonstrating an idiot.

as I expected you just couldn't help yourself signing out and signing in to your other accounts just to play around with the voting, sad idiot.

@terrorist
I second you in everyword you say.

Gotta love the references and judges here... Dory is several years older than Aoun, Hilary is a walking cadaver, Trump is a psycho clown, and you're a pathological hater.

To those who want to know : the mentally ill person is living on Leponex, Zoloft and Xanax.

Seeing Dory isn't a presidential candidate, the reporter is being unprofessional and personal.

Good one LOL, can I try? OK lemme see.. humm.. in his 50's the General was appointed exclusively "Président et six Ministres" with one mandate, to elect a president. When it could not be him, he proceeded to start and lose two wars, then ran away and deserted his command. As the Syrian tanks advanced on his palace and on top of some of his soldiers Aoun has chosen to sip coffee with the French ambassador. Amine should have put him in charge of an Alfa Romeo exclusive agency, can't start wars with an Alfa Romeo exclusive agency..

around 2000 they started to fiddle with his birthday by moving it up to 1935 to make him sound younger, this is the definite answer
https://www.lebarmy.gov.lb/en/content/michel-aoun

How desperate are these people?

“If somebody wants to sell a piece of property and he is above 80 years of age, he is usually requested to submit a medical certificate stating qualification of carrying out such an operation"
Aoun has already sold his ideals, his conscience and Lebanon's sovereignty to become president and still he's nowhere near it, poor fellow.