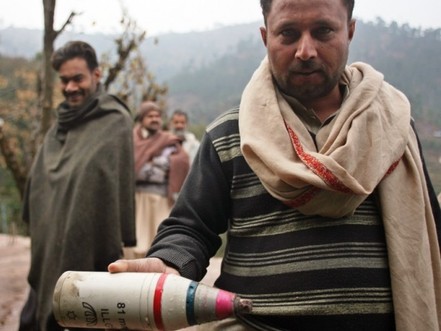 Indian commandos carried out a series of lightning strikes Thursday along the de facto border with Pakistan in Kashmir, provoking furious charges of "naked aggression" from its nuclear-armed neighbor.

Amid anger in India over a recent deadly assault on one of its army bases in Kashmir, officials said troops had conducted "surgical strikes" several kilometers inside the Pakistan-controlled side of the disputed territory to prevent attacks being planned on major Indian cities.

The strikes aimed at "neutralizing the terrorists" had caused "multiple casualties", according to Indian officials.

Pakistan said two of its soldiers had been killed and nine more wounded in what it described as small arms fire and dismissed the talk of surgical strikes as an "illusion" designed to whip up "media hype."

"Some terrorist teams had positioned themselves at launchpads along the Line of Control," Singh told reporters.

"The Indian army conducted surgical strikes last night at these launchpads. Significant casualties have been caused to these terrorists and those who are trying to support them."

Singh said the decision to launch the strikes was taken following intelligence that militants were planning "to carry out infiltration and terrorist strikes in Jammu and Kashmir and various other metros" in India.

A senior government source said commandos carried out the strikes some way across the unofficial border known as the Line of Control (LoC), beginning after midnight and finishing before dawn.

"They were conducted two-three kilometers across the LoC," the source told AFP on condition of anonymity.

"Seven launchpads were targeted. The defense minister himself monitored the ops and the Indian side did not suffer any casualties."

Another Indian government official source put the number of dead on the Pakistani side in "double digits."

Most of the casualties were "terrorists", said the source, insisting India had not been targeting the Pakistani army.

"There has been no surgical strike by India, instead there had been cross border fire initiated and conducted by India," said a military statement.

"As per rules of engagement same was strongly and befittingly responded by Pakistani troops."

Tensions between the two arch rivals have been boiling since the Indian government accused Pakistan-based militants of launching an assault on an army base in Kashmir earlier this month that killed 18 soldiers.

India has also been on a diplomatic drive to isolate nuclear-armed Pakistan since the raid on September 18, the worst such attack in more than a decade.

On Tuesday India said Prime Minister Narendra Modi would not attend a regional summit in Islamabad in November in a major snub to its neighbor.

Ashok K Mehta, a retired major general in the Indian army, said it was the first time in a decade that officials in New Delhi had acknowledged its troops had crossed into the Pakistani side of the LoC.

"We have to see whether the Pakistani army will respond in kind.... Now the the ball is in Pakistan's court if they want to escalate things."

Residents on the Pakistani side of the LoC were hunkering down over fears the situation could unravel further.

"I did not send my children to school today. The situation is very tense," said Tahir Iqbal, who runs a grocery in the town of Athmuqam.

There was similar foreboding on the Indian side as villagers living along the LoC and the undisputed international border further south in the state were placed on alert to evacuate if required.

Kashmir has been divided between India and Pakistan since gaining independence from Britain seven decades ago.

The Indian-controlled part of the picturesque territory has a Muslim majority and there are a number of armed separatist groups who are fighting to break free from New Delhi.

India has said the attack on the Uri army base in Kashmir was carried out by a Pakistan-based group called Jaish-e Mohammed.

Tensions had already been high in the region since the Indian army killed a leading Kashmiri separatist in a gunfight in early July, sparking a series of protests that have been staged in defiance of curfew orders.

More than 80 people have been killed in the Indian-controlled part of Kashmir since July, many shot by the army at the protests.