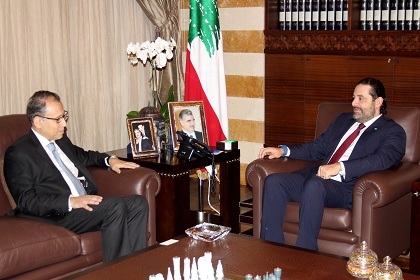 “I was honored to meet with (ex-)premier Hariri, who has a special relationship with Egypt. He returned from abroad a few days ago and I wanted to meet with him as soon as possible to discuss the latest developments,” Naggari said after the Center House meeting.

“Hariri is exerting a great effort to end the presidential vacancy and this is important for all the Lebanese. He has a large role and an active presence in the Lebanese political life,” he added.

The envoy said Hariri briefed him on “the latest developments on this issue and on his view about the situation in Lebanon.”

“We agreed to pursue the consultations in the coming period. It is clear that the matter is open as well as the options. Ex-premier Hariri is considering the possibilities and he will continue the consultations with all political forces,” Naggari added.

“We will pursue this matter with him, and we hope that Lebanon will have a president as soon as possible, because the presidential vacancy for a period of two and a half years is unacceptable, and should not last more than that,” he went on to say.

Hariri's return to Lebanon on Saturday has triggered a flurry of rumors and media reports about a possible presidential settlement and the possibility that the ex-PM has finally decided to endorse Free Patriotic Movement founder MP Michel Aoun for the presidency in a bid to break the deadlock.

To all our educated and civilized friends:

"A man can have sex with animals such as sheep, cows, camels and so on. However, he should kill the animal after he has his orgasm. He should not sell the meat to the people in his own village, but selling the meat to a neighbouring village is reasonable."

Caporal is a corrupt person, a liar, an agent, a mareedman and a traitor who is destroying our country.
He has already destroyed a great deal of our economy. Many commerce, shops, restaurants, have gone bankrupt. Our industries are reducing their outputs, our tourism is in shambles, our exports are diminishing, our growth is zero, more and more people have lost hope and are leaving for other lands...
Dirty man with his son-in-outlaw and their clan of gangsters who are harming Lebanon like no one did before...

To PM Hariri:
We always loved you. Please pay attention to the promises of the Caporal : verbal or written. In both cases he has no loyalty to his ptomises. Remember the "Baabda declaration"; the "Bkirki declaration",,,???