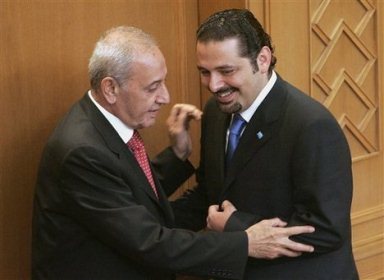 Al-Mustaqbal Movement leader ex-PM Saad Hariri held talks Thursday evening with Speaker Nabih Berri as part of his latest drive regarding the issue of the presidency.

The meeting was followed by a dinner banquet, according to media reports.

Hariri had met with Marada Movement chief MP Suleiman Franjieh, his declared presidential candidate, in the wake of his return from a several-week foreign trip.

He has also met with Kataeb Party chief MP Sami Gemayel and Progressive Socialist Party leader MP Walid Jumblat and, according to MTV, he is scheduled to meet in the coming hours with Free Patriotic Movement founder MP Michel Aoun and Lebanese Forces leader Samir Geagea.